Doug Jones has played some of the most well known characters in modern cinema. Now he’s sitting down to discuss his film career, toys and his latest project: MIME VERY OWN BOOK. 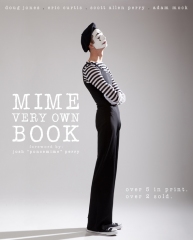 Doug Jones, the versatile actor who has played some of the most well known characters in modern cinema, recently released a new book, MIME VERY OWN BOOK. He took some time from his busy schedule to speak to me about acting, toys, and mimes.

Mike Drake: You’ve done so many films and had so many great rolls. What character do most people recognize you as? Conversely, is there a character nobody realized was you?

Doug Jones: It all depends on where I am, or what type of event I’m appearing at, but the mainstream crowd knows me equally as the Silver Surfer and Abe Sapien from the HELLBOY movies. The more artsy or horror crowds tend to know me as the Faun and Pale Man from PAN’S LABYRINTH, as well as the Lead Gentleman from BUFFY’s “Hush” episode. And the surprise character is “Billy” the goofy zombie from HOCUS POCUS. So many kids grew up with that movie, and just shriek when they hear that was me.

MD: Is it harder, easier, or just different performing is a costume/mask as opposed to as a “regular” human?

DJ: Just different, I’d say. Physically harder in a heavy costume, of course, but as a human character, overcoming fear as your face is exposed is the hurdle there. 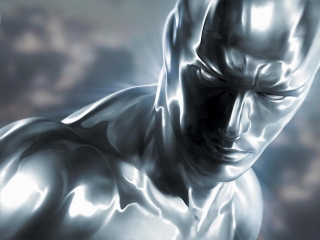 MD: Which do you prefer?

DJ: A good role is a good role. As long as the character is yummy, has great dialogue, both verbal and/or physical, great relationships on-screen in a great story, I’m happy to play that character whether it’s a guy in jeans and a t-shirt or a growling monster with talons.

MD: Whenever they talk of remaking THE CREATURE FROM THE BLACK LAGOON, we hear your name attached to it. Is this because of your amazing performance as Abe Sapien? Is the Creature one of your “dream” characters?

DJ: The Creature was absolutely one of my childhood influences. I sort of got that itch satisfied when I played the clairvoyant fish man in HELLBOY 1 & 2. I wouldn’t turn it down if offered, but I’d almost want my good friend Brian Steele to get that role, as he’s expressed an interest in playing the Creature From The Black Lagoon for many years now. And I know him well enough to know he’d have such a powerful presence to pull that one off flawlessly.

MD: Rumor has it we’ll be seeing you as Frankenstein very soon…. Would you care to comment?

DJ: This would be another collaboration with Guillermo del Toro, who has this in development at Universal Pictures, as we speak. It’s been a life-long dream of his to do this story, as it’s the book and movie that made him want the very career he has today. Frankenstein’s Monster’s make-up design that I would wear is to be based on the Darkhorse illustrated version of “Mary Shelley’s Frankenstein” book with the gorgeously haunting artwork of Bernie Wrightson. Guillermo has mentioned he wants to explore that heartbreaking relationship between creator and monster, as with all the angsty passion of a father/son relationship. Let’s all hope this goes from development to filming, because I feel this could be another del Toro masterpiece. And if it doesn’t get made, I’ll just cry a lot, and no one wants to see that. 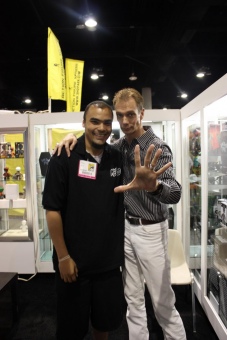 MD: You really seem to enjoy interacting with fans and convention organizers frequently talk of you as a “fan favorite”. Any interesting fan/ convention stories?

DJ: I love appearing at fan conventions of all types, as this is where I get to meet and hug on the people who have been watching my work all these years, and therefore, helped me buy my house! One of my favorite stories that made my head tilt, and yet humbled me beyond belief, was the precious fan girl who asked me to sign her forearm in permanent ink. I did, and she came back to my table two hours later with that autograph covered in plastic and red around the edges … tattooed onto her arm!! I had no idea anyone would ever want something that permanent from me!! So sweet.

MD: You have a very unique physique. Is your height creating an optical illusion making you look thinner or is someone stretching you on a rack each night? What is your waist size?

DJ: I’m guessing it’s no optical illusion that I look skinny, as I stand 6′ 3 1/2″ and only weigh 140 pounds with a 29 inch waist. That just plain looks skinny from any angle. In any light. With any lens.

MD: You’ve been made into several action figures and statues; do you have them all and do you have a favorite? 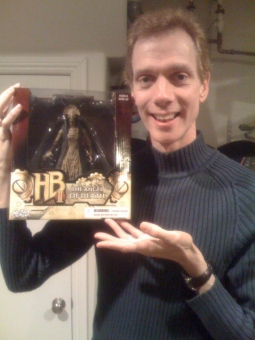 MD: So you have a new book out called Mime Very Own Book. What was the inspiration behind it?

DJ: I started as a mime back in college at Ball State University. Meeting Adam Mock (President of Medallion Press) at a party a few years ago, the discussion started with him asking,”How would a mime write a book?” Then we brought in my good friend Scott Allen Perry to collaborate on writing all the concepts and one-liner puns that propel this coffee table photo book. Photographer Eric Curtis was brought in with his uncanny sense of light, and Scott’s little brother Josh “The Ponceman” Perry (star of the huge YouTube hit “Retarded Policeman”) joined us to write and model the foreword of the book. My face make-up was a design I created as my mime character in college, but this time it was applied by my Oscar-Nominated make-up artist Thom Floutz.

MD: Anything else you would like to say about the book?

DJ: If you love mimes, this book is everything you love about mimes. If you hate mimes, this book is everything you hate about mimes. With photo depictions of every pun we could think of from “A Mime is a terrible thing to waste” to “A meeting of the Mimes” to “Once upon a Mime” every imaginable pun was thought up and photographed. We also made fun of famous people, works of art, moments in history, movies & TV, anything pop culture, including “Marilyn Mime-roe”, “Mime-hammed Ali”, “The Little Mer-Mime”, “Mime-y Vice”, and my personal favorite, a multi-page tribute to Michael Jackson that we titled “Mime-a Say, Mime-a Sa, Mime-a Coo-sa!” MIME VERY OWN BOOK is available on Amazon.com as well as Barnes & Noble.

And there you have it. To learn more about Doug Jones visit his official website at http://www.thedougjonesexperience.com/

We here at Youbentmywookie would like to give a special thanks to Mike Drake for sharing this interview with us. To learn more about Mike, watch ODDITIES episode Killer Queen this Saturday 6/02 on SCI Channel.
http://science.discovery.com/tv/oddities/episodes.html
# # # 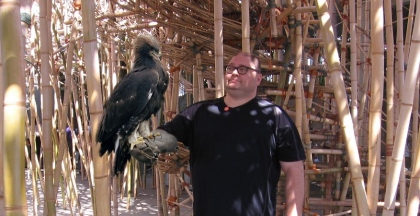