Where Can You Have A Closer look At The Aliens From MIB3? Queens, Of Course!

Exploring the great new Men In Black 3 Exhibit at Museum Of The Moving Image in Queens, New York.

For the second day in a row, our good friend Mike Drake is back with another great article. This time, he’s exploring the great new Men In Black 3 Exhibit at Museum Of The Moving Image in Queens, New York.

This Article was written by Mike Drake. 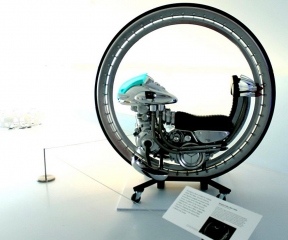 Entering the recently redesigned Museum of The Moving Image is reminiscent of entering MIB headquarters. The all white lobby has a futuristic feel that makes you certain Tommy Lee Jones and Will Smith are right around the corner. The fact that Smith’s monocycle is parked in the lobby only serves to reinforce the idea. As part of the Aliens, Gadgets, and Guns: Designing the World of Men in Black 3 (running until September 23, 2012)exhibit there is a magnificent display of alien creatures, memory-erasing neuralyzers, alien weapons, a monocycle, and the iconic black shades worn by Agents J and K. Adding to the fun, exclusive behind-the-scenes footage of Baker creating alien creature makeup is also featured in the exhibit.

7-time Academy Award winner Rick Baker has packed MIB3 with so many aliens, one care scarcely register them all as they appear on screen. Here, in the cool confines of the museum you can examine them up close and be amazed. The level of detail is astonishing. Detailed pores, tiny hairs, wrinkles, folds, all come together to create the illusion of life. Staring into the flawless, oversized eyes of one creature I kept expecting them to blink. All I could think was, “Rick Baker deserves an 8th Oscar”. 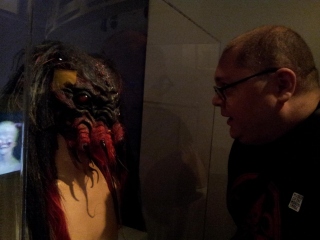 While all the creatures are exceptional, a spider creature stands out. In the film he appears for less than 30 seconds, yet Baker has put more work into what is essentially a background character, than some feature films put into their star creatures (I’m talking to you Chernobal Diaries!). The creature known as Spiky Bulba, perhaps best known for being featured in Dunkin’ Donuts’ MIB3 commercials, is displayed and appears to be a favorite of children. During a recent visit I watched a young girl blow the little creature a kiss as her family pulled her away from the display and deeper into the museum. It is well known that Baker is a fan of Bug Eyed Monsters and classic sci-fi films and his admiration for them is evident in these loving tributes.

Baker said recently “When ‘Men in Black 3’ started to happen, Barry sent me an email saying, ‘I know you’re retired, but I can’t imagine doing “Men in Black” without you. Would you please consider coming out of retirement and doing this film?’ And first of all, I’m not retired — I’d just won an Oscar . I’m just being selective — and nobody has to beg for me to do the ‘Men in Black’ movies. I love them.”
The exhibit also features futuristic firearms and ingenious gadgets that look more like fully functional gizmos rather than film props.

One of the interesting facts not evident in the exhibit is that much of MIB3 was filmed across the street at Kaufman Astoria Studios. As someone who visits the museum regularly (Note: get a membership, it more than pays for itself!) and brings guests there frequently, I hope that they get to keep a few of the items for their permanent display. One also hopes that this is the beginning of a relationship between Rick Baker and The Museum Of The Moving Image that will lead to more of his works becoming part of their permanent collection. 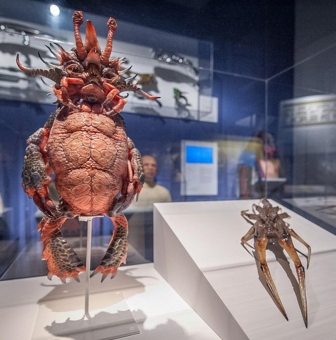 To learn more about the exhibit visit: href=”http://www.movingimage.us/exhibitions/2012/05/09/detail/aliens-gadgets-and-guns-designing-the-world-of-men-in-black-3/”>Moving Image