OK, maybe not since forever, but definitely the freakiest not counting Toddlers and Tiaras and My Virgin Wedding. 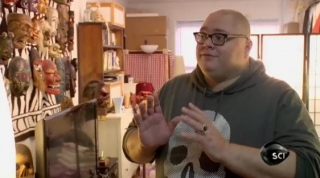 …OK, maybe not since forever, but definitely the freakiest not counting Toddlers and Tiaras and My Virgin Wedding. Mike Drake is more than just a very important member of the toy community and a friend of and contributor to YouBentmMyWookie. He’s also a sometimes participant in the freakiest returning reality series on Cable, The Science Channel’s ‘Oddities’. When the show returned a couple nights ago for a new season, the the owners of Obscura Antiques & Oddities in New York were back on the hunt for the weirdest and creepiest of artifacts. Not surprisingly, this led them right to Mike Drake’s door.

This time, they were looking for death masks and when they enlisted Drakes help, they found what might be the freakiest thing ever to appear on their show… hanging right on Drake’s wall!

What was it? A death mask of a two-headed baby!

“That’s pretty creepy,” Zohn said. “It’s probably a little too much inspiration [for the client]. She wants something a little more … traditional.”

Drake then offered an alternative death mask, one known in French as “L’Inconnue de la Seine,” or “Unknown Woman of the Seine.”

“I believe it was around 1880, this woman drowned and, when they pulled her out from the river, they couldn’t identify her,” Drake said. “So they made a cast of her face for the purpose of identifying her later on. And it was unusual because she was smiling.”

“What’s interesting is that she’s been called the ‘most kissed woman in the world,’ because this is the face they used to make the first Resusci Anne doll,” Drake said. “So if you took a CPR class, these are the lips you kissed.”

Watch Mike and the Obscura crew below! 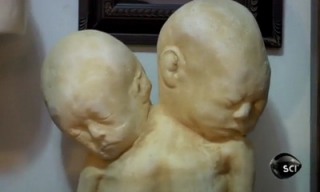