Pillow Pets
It’s a Pillow. It’s a Pet… It’s a Pillow Pet! It doesn’t matter how old you are, by now everyone should be familiar with Pillow Pets or have at least one of these adorable transformable pets pillows. Since their phenomenal national debut in 2009, Pillow Pets have expanded from farm animals and zoo creatures to include sport mascots (professional and collegiate) and Nickelodeon (Sponge Bob Squarepants, Dora the Explorer) and Disney licensed Pillow Pets (Mickey Mouse, Pixar’s Cars and Winnie the Pooh)!

The process to transform a pet into a pillow is as easy as un-velcroing a strap. And cuteness factor aside, Pillow Pets also make amazing soft pillows living up quite well to its namesake. They’re the perfect gift for any occasion and anyone, whether boy, girl, woman or that one fanatic you know who goes to sporting events wearing nothing but body paint. Ya, you know who I’m talking about, we all know that one guy.

Get yours today at: PillowPets.com 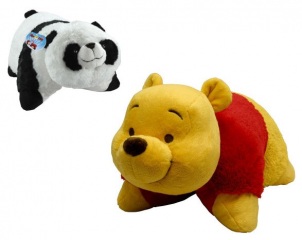 This will become a workhorse toy in your house. It is almost like a unisex doll house. Not only is it a space ship, but it opens up into a cool space station. it has flying sounds and also does the count down to blast-off which is a lot of fun. Mickey doesn’t even have to walk around because he comes with a little moon rover.

Get yours today at: Online retailers

The Fisher Price Learn Through Music Touchpad is a pretty neat toy for the 2-4 year old range of kids. It is a touch pad, but it isn’t like the Leap Pad or anything from V-Tech. This is a great toy to get your kids before you get them one of those. Instead of traditional computer animation, you are mostly dealing with static images that change from one picture to another as the scene changes. Each scene has questions that ask you to push the pictures with the right answer and songs that you can pick up the attached microphone and sing along with. Once your kid is solid with the mechanics, thn next Christmas, they will be ready for something a little more techy.

If you are looking for a great entry level dress up doll for kids in the 3-7 year old range, you rally can’t do much better than the Dora The Explorer Collection Dress Up Doll. At fifteen inches, she’s a great size, Barbies are still a little small for the younger side of the scale. She’s also Dora, which makes her like Lady Gaga for the pre-teen set. It is a cute, well constructed doll and the clothing is easy to put on and take off. Also, the base doll comes with a storybook and two outfits, so the dress up fun begins right away.

If you aren’t happy with just the two base outfits, you can buy a bunch of other outfits for around $17.00 each. The outfits are great because they aren’t just a bunch of clothes. each kit comes with a storybook that fits the outfit. It also helps you learn both English and Spanish, just like the show. There are a bunch of different outfits to choose from like “Rainy Day” and “Beach Adventure”. These are great to pick up and then give periodically through the year to help extend the play life of the doll. 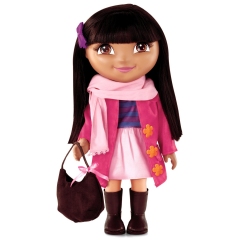 This might be the ultimate toy for animal lovers under the age of 6. I don’t think that Fisher price could have stuffed any more interactivity into the Little People Animal Sounds Zoo. The first thing that makes it so great is that this toy encompasses multiple ecosystems. So, while it isn’t a small toy, it really feels like several toys at once. It features Grasslands, Arctic, Jungle and Water habitats.
It has all the basic stuff that you want for your little kids in a play set. There’s a slide, a swing, plenty of moving parts, but it is the electronic interactivity that really got us excited. When you place one of the many figures on the sensors (lion, polar bear, gorilla and Zookeeper Zack) it makes the proper animal sounds and tells you what animal it is. That is how kid’s learn the best, by being able to make things happen. Also, the figures are ridiculously adorable. This is one toy that kids will definitely play with more than the box! 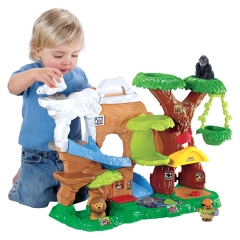 Fisher Price Rock Star Mickey
Last year Fisher Price made a big splash with Dance Star Mickey. While he was a great toy, this year Mickey has been updated into Rock Star Mickey. There are some great improvements here over Dance Star Mickey. Rock Star has better animation, better interactivity and he just feels and looks way better. We really loved the way this one moved. Rock Star Mickey jams (semi)realistically on his guitar. He even does some trick moves like lifting his guitar up in the air while he plays. he also has great dance moves like the way he kicks while he plays and sings and how he actually does splits like a full on 80’s hair band rocker! The tail is great part of the design here because it helps stabilize him as he moves around, dancing and singing.

A lot of people are looking at getting either this or Rock Star Elmo this Christmas for their kid. We think that this one is the way to go for a few reasons. First, with Elmo, you are going to have to keep buying more and more accessories to go with him. Also, how many times can you listen to the Elmo’s world theme without wanting to find a clock tower and… Anyways, Rock Star Mickey all the way! 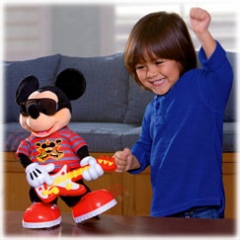 Matchbox Smokey The Fire Truck
You know it is a good sign when we like playing with a toy just as much as the kids. Matchbox’s Smokey The Fire Truck was just that kind of toy. Set for kids ages 3+, this is a great toy for both boys and girls. As an added bonus, once they see his animated (and super cool face) and they watch him stand up and move his arms… you have a guaranteed Transformers fan in the waiting.

So what does Smokey do? Jeesh, what doesn’t he do. He talks. He eats… HE FARTS! He also sings and is super interactive. You can extend his ladder and shoot balls that represent water from his hose cannon. He even knows when he needs more balls. If there’s one thing that you might want to watch out for… Smokey is pretty loud. He is a fire truck after all. We only say that because if you have a kid that is super noise sensitive, it is something to take into consideration. It really is no wonder that Smokey is one of the hottest toys of the year. This guy is amazing!

Get yours today at: Mattel 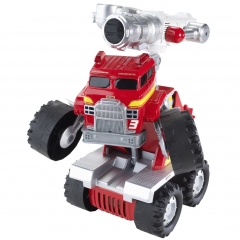 Pocoyo is one of the hottest cartoons for little kids. Why wouldn’t it be, it has a funny name and a cute kid with a goofy hat! Squiggle track style toys are not anything new, but they are always a great gift for kids who like toys that move around or kids who like to build. Unlike a normal slot car style track, squiggle tracks actually move with the car that is riding on them. Also, you can connect them into all different types of shapes, so it is also a great toy for kids who are getting into Duplo and things like that. We liked that there’s variety in the set up of the toy, it keeps kids from getting bored with it. Even the adults had fun seeing what types of track configurations they could come up with.

Get yours today at: Bandai.com 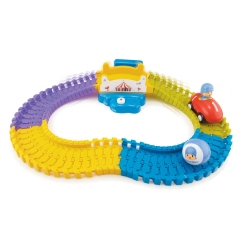 Let’s forget for a moment that it is kind of absurd for a horse to need a car. Once you get past that basic concept, you can see that this is a great first RC car for the Pony loving girl in your house… or the over aged Bronie who can’t get enough of Friendship is Magic.

Here is what is really important. The Pinkie Pie RC car is really easy to drive around and it cute as… well, as cute as a my little pony RC car should be. It comes with Pinkie Pie and will sit a second pony beside her. I have a feeling that the large seating area means that this little car is going to be the make believe taxi for just about all of your kid’s little figurines. At least they’ll be riding in style!

Get yours today at: Hasbro 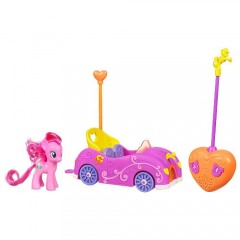 Want your kid to get hooked on Transformers at an early age? Get them this! Optimus Prime has been all sorts of things before, but he’s never been a whole freakin fire station! Seriously, with the turn of a switch, you can convert the whole fire station into Optimus’s head. You also get a lot more than just the building (which folds up really nicely in case you are wondering). It also comes with a fire bot vehicle and a Cody Burns action figure. All in all, the set is a lot of fun to play with. It has tons of sounds and cool bits of interactivity like the doors and the fire hose. This is a great toy for any kid with an imagination.

Get yours today at: Hasbro 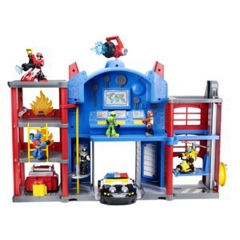