For the first time ever, we are really happy to be teaming up with Vinyl Pulse, the best blog out there for all the news you could ever want on vinyl toys and the artists who make them. All of the selections for the Vinyl/ Art Toys section of this year’s holiday gift guide were picked by the owner of Vinyl Pulse, Jack Muramatsu. We will also be co-hosting the biggest giveaway of the Holiday Gift Guide, a Cube 3D printer from 3D Systems!

The Nosellots (‘knows-alots’) are a line of adorable plush characters from LA artist Scott Tolleson. Lyle Bean, Berrnie Cotton Francis and Sayjo Bean are all proudly intelligent and snappily dressed. Beyond the appeal of their fun, stylish character designs, the Nosellots also subtly encourage children to view intelligence as a positive, ‘cool’ trait.

Get yours today at: Screaming Sky Gallery 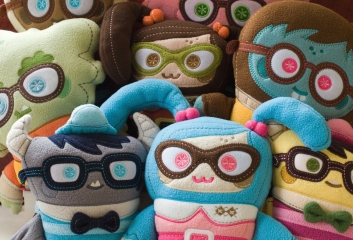 The Micro Munnyworld figures are Kidrobot’s newest and smallest additions to their premiere Munnyworld line of DIY (do-it-yourself) vinyl toys. At 2.5” tall the new products offer an extremely affordable blank toy ‘canvas’ for artists, budding artists and those just looking to for a toy to decorate (‘customize’) with paint, markers or other artistic mediums. With their combination of industry-leading affordability and easy-to-disassemble construction, the Munnyworld figures are state-of-the-art DIY toys.

Get yours today at: Kidrobot 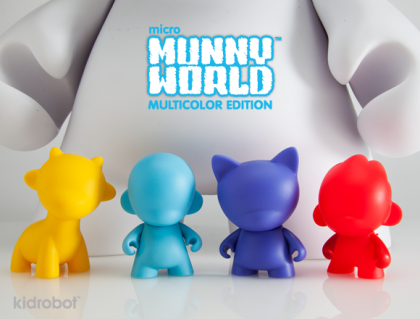 The Roto-a-Matic Helper Dragon from Rotofugi combines old-school, retro ‘instant’ manufacturing technology with Tim Biskup’s mid-century modern inspired art. A forgotten technology, coin-operated Roto-a-Matic machines once delighted children at Museum and Zoo venues by producing simple plastic toys before their eyes. Rotofugi has painstakingly retrofitted one of these vintage machines and uses it to make affordable art toys with a remarkable and nostalgic back story.

Get yours today at: Rotofugi 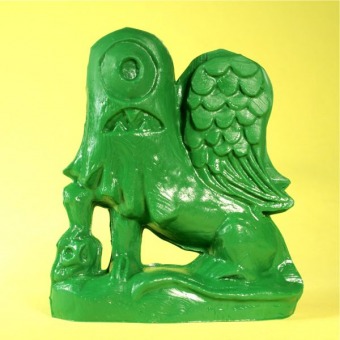 Get yours today at: Dudebox 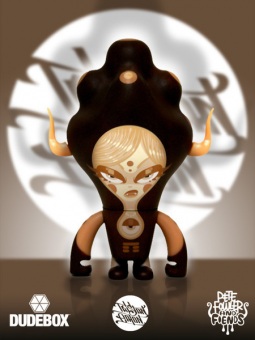 Over a career spanning several decades, Ron English has established himself as a remarkable artist and cultural critic. His self-labeled Popaganda style of art subverts popular culture and in particular brand advertising to comment on what he perceives as society’s persistent ills. Fat Tony epitomizes his work in one appealing design. A back-handed homage to the Frosted Flakes mascot, Fat Toy has a nostalgic appeal but also appeals to those savvy customers who recognize the character from Ron’s clever underground campaign to raise awareness of what he sees as a link between sugary foods and diabetes.

Get yours today at: BAIT 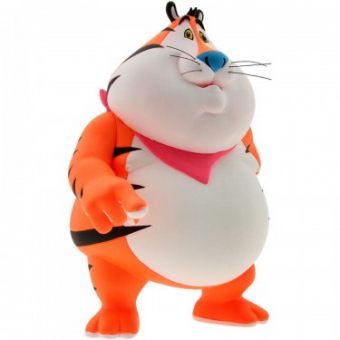 Known for his now iconic bear character, LA artist Luke Chueh has established quite a following among fans and collectors drawn to the dark but yet honest nature of his often self-deprecating art. Based on an original painting of the same name, the new Target art toy from Munky King illustrates the artist’s appeal in the portrayal of a hapless glutton for punishment who assists those who would mock, torment or hurt him by painting a bullseye on his own belly. The elaborate piece features the vinyl bear with a paint brush and bucket, attached to a removable base with a resin ‘brick’ wall. More than just a backdrop, the wall also allows collectors to link two or more of the toys together (different editions in particular) for an impressive display.

Get yours today at: Munky King 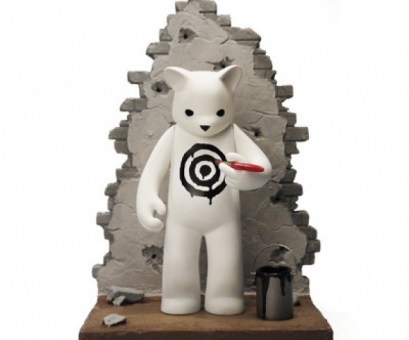 Designed by established illustrator and vinyl toy designer Andrew Bell, this is the third series of Android mini-figures based on the official mascot of Google’s extremely popular mobile phone and tablet operating system. Fueled by the crossover appeal for both smart phone aficionados and vinyl toy collectors, the first two series quickly sold out at retailers. Released a few months ago, this new series is the first to feature designs by several artists well-known to those who collect vinyl including Sket-One, MAD, Scott Tolleson, and Huck Gee.

Get yours today at: myplasticheart 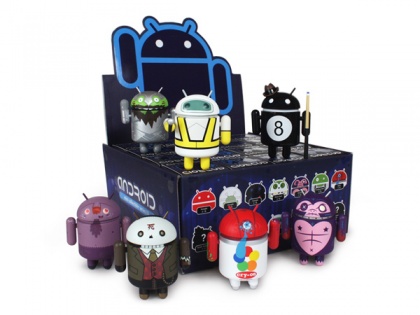 Created and self-produced by independent artist Gary Ham, Monster Toytem offers a rarity in the vinyl toy world – playability. The Toytem features six stackable characters, many based on iconic monster archetypes including the reanimated brute, a merman and a vampire as well as Ham’s Hermes the bat. The integrated peg system allows collectors to rearrange the Toytem as they see fit. Visually engaging, this edition of Monster Toytem is readily available and should please curious friends and family nearly as much as the lucky recipients of this gift.

Get yours today at: Gary Ham 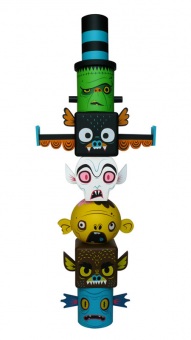 The new Singporean art toy brand Mighty Jaxx collaborated with one of that country’s leading street artists, Clogtwo, on the distinctive Hell Lotus vinyl figure. The visually arresting juxtaposition of Buddhist elements such as the Lotus flower and prayer beads with the care-free skull character offers a commentary on the intermingling of the traditional with the modern. Limited to just 50 pieces, this black+white edition builds on the success of the original color edition with a popular ‘mono’ paint treatment. With an uncommonly detailed sculpt, Hell Lotus is an ideal gift for an experienced collector looking for something ‘outside of the box’ and will also appeal to those who thirst for authentic ‘urban vinyl’ – once a mainstay of the vinyl toy genre.

Get yours today at: Rotofugi 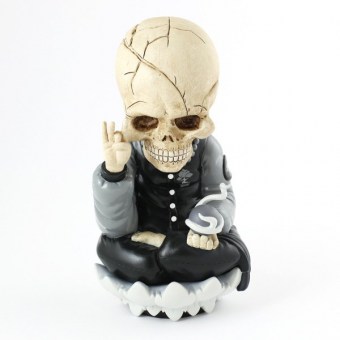 Shawn Smith is about as close to a ‘legend’ in the world of designer plush as any artist could hope to be. Through his Shawnimals brand, he’s created countless plush hits including his Mustachio line. Hand-made in Chicago, the limited-edition Frostachio is a seasonally appropriate, humorous gift for your favorite plush fan.

Get yours today at: Shawnimals 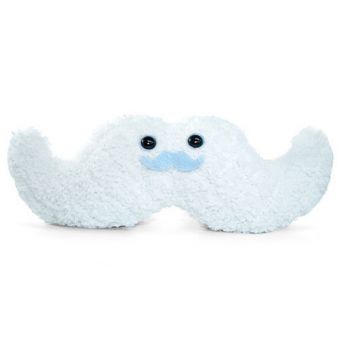 This new series of colorful and cute 2” unicorn figures from tokidoki builds on the popularity of the original series with all-new designs. Fueled by lead artist Simone Legno, tokidoki has established itself as a go-to brand for discriminating consumers looking for the latest in cutting-edge adorable character-based apparel and toys. Released in early December, the Unicorno S2 figures will have broad appeal especially with teenage girls and young women due to their newsness, the tokidoki brand, the reasonable price point and the ‘blind’ packaging which makes opening each box a surprise.

Get yours today at: Tokidoki 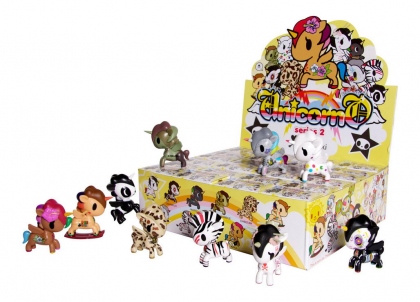 Get yours today at: BAIT 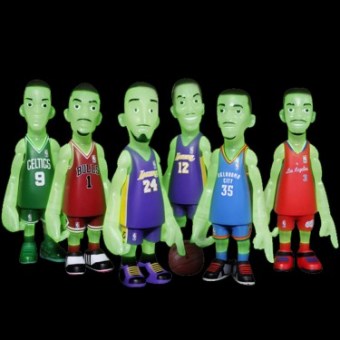 Released in November, Dunny Apocalypse is the latest 3” Dunny Series from Kidrobot. One of the best such series in recent memory, Apocalypse features designs from popular artists including Jesse Hernandez, Joe Ledbetter, Huck Gee, Ron English and more. More than eight years in, Dunny is still by far the most popular designer toy ‘platform’ available – the character has an undeniable appeal and lends itself as a flexible canvas for a variety of artistic designs. Dunny’s popularity combined with the quality of this newest series and the fact that this is the more limited of the two annual series, makes Dunny Apocalypse a great gift for almost any fan of designer toys.

Get yours today at: Dragatomi 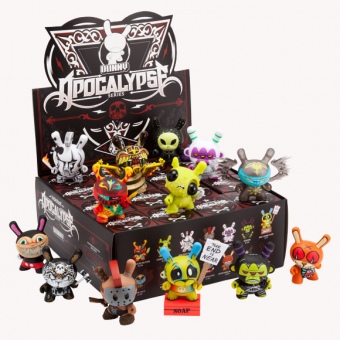 Created by Texas artist FERG, the ongoing line of popular Squadt figures feature a unique blend of the technical detail of 1:6 scale (12”) figures with a designer toy aesthetic. While the proportions and shape of the Squadts are somewhat ‘cute’, their payloads make them quite formidable as well. Released in early Fall of this year, Jack s003 [Fort Burnout-DSRT] features a popular Squadt character ready for action with night vision goggles, a submachine gun, tanto knife, and timely desert style fatigues. This one is ideal for those interested in the military and modern weaponry.

Get yours today at: Dekorner 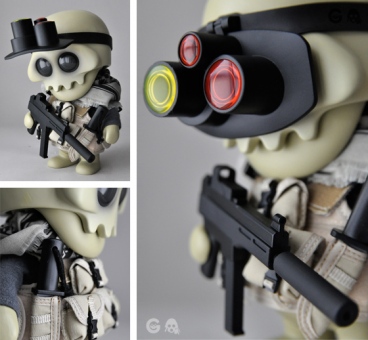 Just released for the Holiday season, the limited-edition Pocket Pork Dumpling: Gingerbread figures are the latest iteration of the Pocket Pork characters created by Chicago artist Shawn Smith of Shawnimals. While Shawnimals is known primarily for their plush, this dumpling character has proven to be popular in vinyl with several versions including the recently released Pocket Pork mini-figure series from Squibbles Ink and mphlabs, which this standalone Gingerbread edition is based on. Pocket Pork Dumpling: Gingerbread is a fine vinyl morsel for the holidays, equally comfortable in a display case or in a cubicle.

Get yours today at: Squibbles Ink + mphlabs 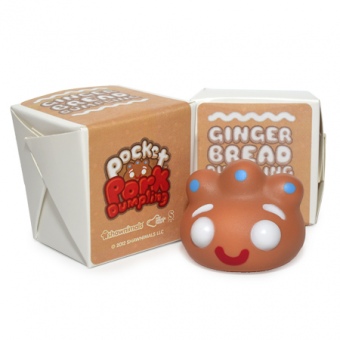