We’ve featured the Gear Ring from Kinekt Designs for a few years now, and we still think that it might just be the coolest ring you can buy. However, this year they’ve taken things to the next level with the launch of their new Gear Necklace. The heart-shaped necklace has three gears inside that all turn as you move it along the accompanying chain. If you want to show someone that you love them with truly unique piece of jewelry this season, you really can’t go wrong with the Gear Necklace. Also, if you are looking for jewelry for someone with sensitive skin, the Gear Necklace is made of high quality brushed stainless steel, so it is hypo-allergenic. Finally, if you are looking to give something even more spectacular, you can pick up the Gear Ring and Gear Necklace together at a discounted rate. Normally, we would just show you a picture of the necklace and move on, but to really see just how cool it is, check out this video.

Get yours today at: Kinekt Designs 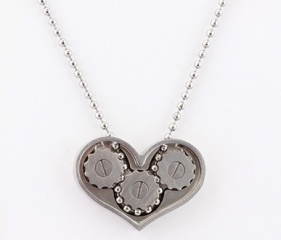 Anyone can give whiskey as a gift. In fact, if you want to give me a gift, I’m happy to take some whiskey… Woodford Reserve please. Anyways, It’s one thing to give whiskey, it’s another thing to give a whiskey flask that your giftee will cherish for the rest of their life and probably leave to someone in their will, that is if they don’t want to be buried with it. Admittedly, The Jacob Bromwell Great American Flask is definitely a luxury item, but you feel the value the second you pick it up and put it to your lips. This isn’t the cheapo flask you used to sneak some schnapps into homeroom class. These flasks border on art. They are hand-made in the USA from the same copper that is used to make the stills that produce whiskey. They come with a cork, because screw tops are for babies. This flask exudes more manliness than Nick Offerman after ten hours of hand to hand combat with a grizzly bear. We passed it around and everyone agrees. You just feel different when you drink from a flask like this. The air is a little more crisp and the whiskey tastes even better.

Get yours today at: Jacob Bromwell 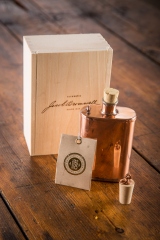 We were not expecting to like Anki Drive when it first arrived. We didn’t. We actually fell in love with it the second we opened the box. Anki Drive turns the concept of the home-based Race car set on its ear. Instead of a track, you get a roll out mat that uses sensors to keep the cars in the track’s boundaries. Instead of those old, clunky controllers, you get an app that let’s you do all the driving right from your iPhone. If that wasn’t enough, there’s weapons! Ya. were speechless too. There’s so much to love about Anki Drive. The cars are gorgeous and they charge in just a few minutes, so you are waiting forever to be able to play. Then there’s the game mechanics. If it sounds like we’re gushing, it’s because we are gushing. This is nuts. The app does more than let you control your car and fire virtual weapons at your opponent. You have a saved profile for your vehicle and are able to level up and earn new and even better weapons to knockout your opponent. Speaking of opponents, one of the biggest downfalls of racing sets as a kid is that I would have to play with them by myself. One car racing around a track sucks. Not anymore. If you are using Anki Drive by yourself, you can still place the other car on the track and the computer will take over, giving you a “real” opponent to chase around the curves. This is one of those gifts that’s not only great for kids, but the parents are not going to want to put away after the little ones go up to sleep.

Get yours today at: Anki Drive 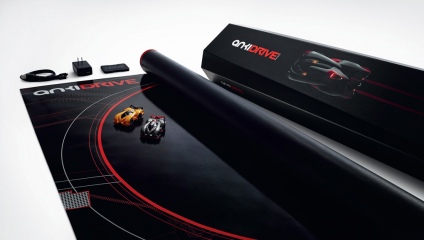 There are more and more companies who are letting the futuristic and even somewhat geeky design enter into their fashion lines. I’m not sure if that was the intent of Glass Handbags with their Rave Metal Clutch, but mission accomplished anyways. Despite the name, no, these clutches are not made of glass. Instead, this one is made from awesome, shiny metal. it looks straight out of Blade Runner, or (when you pop it open), Tron. Why? Because Glass Handbags have a built in light strip on the interior wall so you can find anything from your lipstick to your sonic screwdriver in a dimly lit or dark room without fumbling around like those losers whose bags don’t light up.

Get yours today at: GlassHandbags 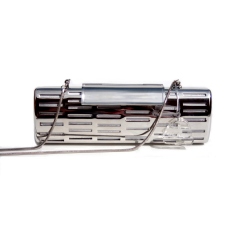 We couldn’t put all this focus on the Star Wars accessories from Cufflinks.com without talking about the actual cufflinks. We like to pick out a pair every year that we think would blow the mind of anyone lucky enough to get it this holiday season. As we seem to have picked up a Vader theme, we thought we’d carry it through with Darth Vader Lightsaber Cufflinks. These things are stunning. They’ve got great detail on them. In fact, the only negative thing we can say about them is that wearing them is a huge distraction. If you aren’t busy having little lightsaber duels with your wrists, the guy next to you is going to be tugging on your sleeve to ask about them. 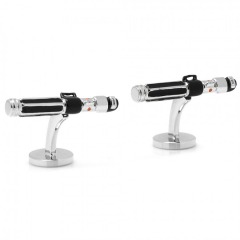 Believe it or not, Cufflinks.com even makes stuff for Star Trek. Sure, Trek was never as cool as Star Wars, but that doesn’t mean that they can’t have cool cufflinks like these Star Trek 3D Communicator Cufflinks. We really loved them because you can actually flip them open, just like the real ones in the TV show and movies. Any Trekker would love to add these to their wardrobe. 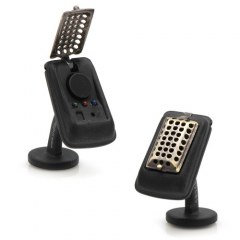 Over in the Stocking Stuffer section of the guide, we showed you some of the light up ties that Electric Styles makes. Along with all those great items they also make an excellent assortment of light up hats. We tried out the electric fedoras and they were very comfy. It runs on juse one AAA battery, so it’s very light. It also is very fun. If a fedora is not your speed, they also offer light up hats in cowboy, millitary general, sailor, pirate, and several message based light up varieties. You can even have them do a custom hat just for you. 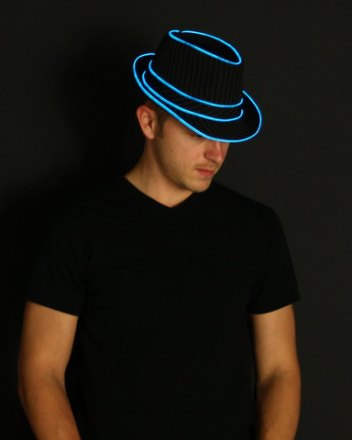 We already know that Electric Styles has your head and neck covered, but they also make really great hoodies that light up as well. The hoodies light up in a line that traces the zipper, up and around the hood and then back down the neck and the other side of the zipper. This one uses a couple AA batteries to light up, but they have their own pocket so it isn’t hassle at all. Also, the battery pack detaches so you can wash the hoodie. We loved that it is a lighter fabric hoodie, so it doesn’t weight you down. We even liked it for people who work out at night, because it makes them easier to spot if they are going for a night time jog. 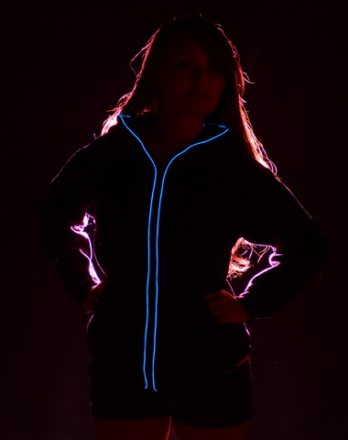 The light up Hydration Pack from Electric Styles might be our favorite thing from them. Hydration packs make life so much easier if you ever go camping, or to music festivals. You can comfortably carry your water supply on your back and not have to get stuck holding a bottle all day long. This pack was not only super comfortable, but it makes spotting friends at night festivals and on camping trips so much easier. One of our testers took it with them on a night time half marathon and they absolutely loved it. 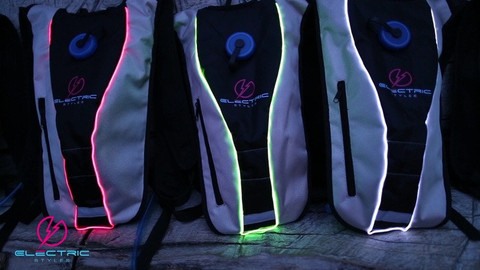