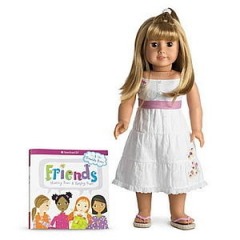 The popular American Girls brand has just released a controversial new doll named “Gwen,” a character who’s actually homeless. Homeless Gwen can be yours for a mere $95, a price tag I’m sure most homeless Americans can easily afford.

According to reactions gathered by CBS sent correspondent Hattie Kauffman at an L.A. shelter many were mixed or confused:

[One homeless advocate] observed to Kauffman that she finds “the whole concept to be extremely disturbing. It’s not a doll I would ever buy for a child.”

One homeless woman in a shelter Kauffman visited said Gwen touched her heart when she saw the doll in its box.

The women praised the doll, Kauffman reports, until they learned Gwen isn’t a fundraising device for the homeless.

“I don’t even see why you would make a homeless doll, anyway,” one woman said to Kauffman, unless it was being used to raise money to help charities aiding the homeless.

At the NY Post, Andrea Peyser, who calls the American Girls line, “middle American Crack,” wrote of the doll: “For $95 — more than your average homeless person would dream of spending on a rather mediocre baby substitute — Gwen Thompson can be yours. A mixed message if ever there was one.”