Are Toys Becoming Too Sexy?

“When we were kids, toys were all about inspiring creativity and childlike wonder. These days, some toys inspire different kinds of feelings … tingly feelings.” 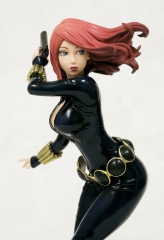 Are toys becoming too sexy? That’s exactly the question of writer asks over at AOL’s Asylum website:

“When we were kids, toys were all about inspiring creativity and childlike wonder. These days, some toys inspire different kinds of feelings … tingly feelings. While we’re ashamed to admit our strange attraction to hunks of plastic, some of the toys we’ve collected here seem designed to elicit such shameful desires.

What happened to sturdy, sexless Shera or the modestly dressed pink Power Ranger? Sure, Cheetara was sexy, but she had some self-respect. While we certainly appreciate the following toys on an aesthetic level, we can’t help but wonder if toys have actually gotten too hot.

Check out a few of the more … intriguing toys and action figures that we found. What do you think? Can toys actually be too sexy?”

Clueless moron of an AOL hired writer aside, many Asylum readers who are less ignorant had a plenty to say. One commenter blasts the article stating, “For crying out loud, if you’re going to write an article, do your research.”

While many many others chimed in insisting that there is a difference between a “toy” and “collectible.”

Amy writes, “Toys” is the wrong word to use.. These aren’t toys..these are more like collector pieces. They’re usually characters from games or anime made into figures for collecting purposes.. I wouldn’t trust any of these items to anyone under the age of 18 anyways.. Sure, they’re sexy.. but they’re usually copying the original art to a T.. And they’re target audiences are usually men between the ages or 20 – 35.. of course its going to show some appeal..but toys? come on.. grow up.”

Greg writes, “wow this is just rediculous. these people need to learn the difference between toys and collectors items or fan shwag. toys are something meant to be played with, ie legos or action figures or puzzles. not these “sexy toys” however. no, these are not toys at all. these posable dolls and pvc figurines are meant for the more mature fans of certain franchises(i say mature because these people are clearly mature enough to know what a toy actually is). and besides the fact the people buying these are more mature fans, the franchises themselves are meant for people of that age group.”

Do you think “toys” are getting too sexy? Is there really a difference between a toy and a collectible? Share your thoughts in the comment section below!

One thought on “Are Toys Becoming Too Sexy?”