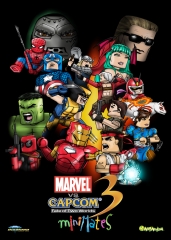 Art Asylum recently blogged and unveiled some cool design sheets for their upcoming Marvel vs Capcom 3 Minimates. It looks as if they’re just as excited to be working on them as I am to hear about their announcement. Here’s what they had to say:

“I remember being a bit nervous about capturing the poses as accurately as possible, it’s tricky business trying to translate human proportions to minimate proportions and be true to both. In my excitement I must have overdone a few things and Robert (Yee) had to point out a few adjustments, which made certain details more consistent.

There were a few characters that were tricky to capture, but I think it turned out pretty decent in the end.”

Not much else is known, but according to the design sheets we’ll be getting practically every character from the game. My favorite has got to be Amaterasu and Zero! A bit disappointed that Arthur won’t have break away armor and that we won’t be getting Resident Evil figures or a Sentinel… or will we? I guess only time will tell.