Boba Fett Always Gets His Man, And In This Case, He Gets The Girl Too

Matt proposed to his girlfriend Jennifer at Comic-Con by hiding the ring inside the package of a soon-to-be released Boba Fett action figure!

This past weekend, at Comic-Con, Star Wars geek Matt proposed to his girlfriend Jennifer by hiding the engagement ring inside the package of the Rocket-Firing Boba Fett. A figure which doesn’t even come out till this fall!

Jennifer, who said yes, was so excited about the figure (probably because it’s vintage styled) that she nearly missed the fact that Boba was actually holding the ring!

This amazing story and one of a kind figure came to be after Matt had partnered up with the Hasbro marketing team to produce this one of a kind Rocket-Firing Ring carrying Boba Fett figure.

Congrats to the geeky couple and the awesome folks at Hasbro for making it happen!! May the Force be with you forever and always!! 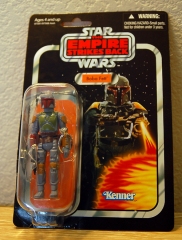