To celebrate South Park’s 15th season, Comedy Central and Frito-Lay are teaming up to bring one of the show’s staple snacks — Cheesy Poofs — to life!

Cheesy Poofs, the favorite snack of “South Park” character Eric Cartman might soon be yours too when Comedy Central celebrates the 15th season of “South Park.”

As part of an extensive promotional campaign, comedy Central is teaming up with Frito-Lay division of PepsiCo to produce 1.5 million packages of the fictional cheesey snack Cheesy Poofs to be sold in Wal-Mart stores beginning next month.

Each bag will retail for $2.99, but if you can’t wait the cheese puffs will officially be unveiled this week at San Diego Comic-Con at the “South Park” Fan Experience.

Comedy Central will present the 15th season of “South Park” in two parts. Part one is expected to run from April 27 to June 8 and the second is scheduled from Oct. 15 to Nov. 16. Currently, the series is renewed for a 17th season through 2013. 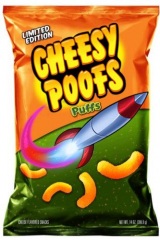