Based on the original painting shown recently at his solo at the Corey Helford Gallery, Lil’ Mort comes with a removable scythe plenty of attitude. 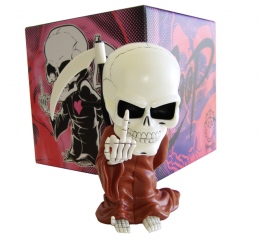 Munky King and 3DRetro is proud to present the first vinyl figure by COOP, Lil’ Mort. Based on the original painting shown recently at his solo at the Corey Helford Gallery, Lil’ Mort comes with a removable scythe plenty of attitude.

Lil’ Mort is 7″ and is currently available in very limited numbers (150!) at 3Dretro.com.

Coop came out to Los Angeles from Bixby, Oklahoma in the late 1980s and quickly became regarded as one of the preeminent underground artists of his time. Through his prolific poster work (over 100 custom prints for bands such as Nirvana, the Ramones, The Sex Pistols and otheres), his custom font stylings for House Industries, his sold out first-edition book “Devil’s Advocate: the Art of Coop” and his popular sketchbook “The Big Fat One”, as well as his iconic imagery of devil girls, smoking devil, and cars, Coop has solidified his place in pop-culture history. Having accomplished a long art career with a successful commercial one (MTV, Altoids, etc), his work has been described as being “now more recognizable to modern youth than that of Rembrandt.” Exhibitions of his work have been held in galleries and museums in Los Angeles, London, New York, Chicago, and Zurich, Switzerland, most recently in May 2009 at the Corey Helford Gallery in Los Angeles.