Alice will come with a croquet mallet, white rabbit, “Drink Me” potion as well as a sculpted mushroom display base. Rex will come with his energy dagger and a base, while Monster Hunter will come with a base and be decked out with weapons from dagger, shotgun to crossbow.

Alice is scheduled to ship sometime in Spring to coincide with the release of Grimm Fairy Tales #75. As a special bonus, each blister carded figure will include a copy of Zenescope’s sold-out Wonderland #1 comic book, with an exclusive cover available only with this figure. One special, limited-edition Alice White Dress chase figure will ship in each six-figure case. Pre-orders are currently being accepted through csmoorestudio.com, Alice priced at $24.99 each. 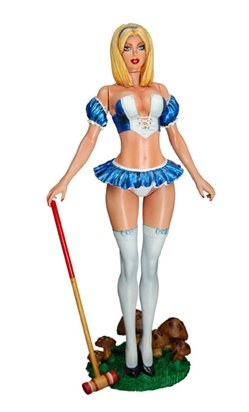