Disney might not have a big presence at SDCC this year, but they are still finding a way to leave their mark with a sweet new Vinylmation exclusive. 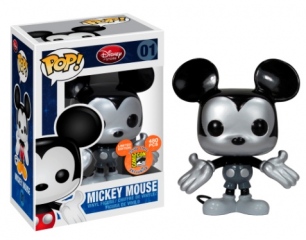 PASADENA, Calif., July 20 2011 –The robots are coming! The robots are coming! Today, Disney Store announced the launch of its exclusive Vinylmation Robots series invading Disney Store locations nationwide and DisneyStore.com on Friday July 22nd. Designed by Disney Store artists who were inspired by vintage wind-up robot toys of the 1950s, the new Vinylmation Robots are also featured in a never-before-seen video on DisneyStore.com/vinylmation , www.youtube.com/disneyliving and on the 2,000 square-foot digital billboard above Disney Store in Times Square. To continue the vinyl craze, Disney Store also revealed its first limited edition Disney POP! Vinyl by Funko at San Diego’s Comic-Con. The POP! Vinyls are Funko’s creative take on Disney characters and the limited edition designs are on sale July 20 through July 24 only at Comic-Con.

“Disney vinyls are the hottest collectible right now and we’re pleased to offer two different styles in one great week,” said John Balen, director of toys for Disney Store North America. “The Vinylmation community keeps challenging us to be more imaginative and creative, and the Vinylmation Robots series is like nothing they’ve ever seen before. Comic-Con is all about exclusives and Disney POP! Vinyls are a great way to give the fans something unique.” 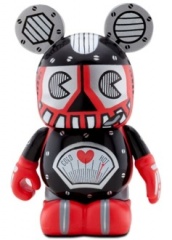 Ben Butcher, Disney-Pixar designer will meet with Comic-Con attendees and sign autographs at the Funko Booth #4829 July 21 and July 22 from 10 a.m. to 11:30 a.m. Guests can also take a break from the madness of Comic-Con and head over to the Fashion Valley Mall Disney Store location, where they can meet their favorite Disney Store Vinylmation artists on July 22 and 23 from 6:30 p.m. to 8:00 p.m.

For information about all Vinylmation series from Disney Theme Parks and Disney Store, guests can visit the official Vinylmation blog at www.vinylmation.com.