Disney Reveals New Toys and Video Game Inspired By ‘Pirates of the Caribbean: On Stranger Tides’

Disney has released some images and information about their new “Pirates of the Caribbean: on Stranger Tides” toy line that’s being produced by toy makers JAKKS Pacific. 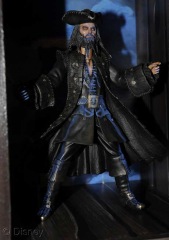 Disney has released some images and information about their new “Pirates of the Caribbean: on Stranger Tides” toy line that’s being produced by toy makers JAKKS Pacific, Inc. A themed preview event was held last night in New York City, to show off the new products with a special appearance by actor Ian McShane, who plays the new pirate character Blackbeard.

Fans can expect the new Pirates toy line including figures and playsets to begin hitting stores this March. They will feature the likeness of Captain Jack Sparrow, Barbossa and more. Fans can also expect Disney to release a full line of Pirates-themed merchandise in conjunction with the film including publishing, apparel, cosmetics, accessories, and stationery.

For more information, please check out the entire press release here:
Disney Consumer Products charted a course for adventure as it unveiled a new toy line that captures the fantasy, action and adventure of Pirates of the Caribbean: On Stranger Tides, the fourth installment of the film series set for release in Disney Digital 3D(TM) on May 20, 2011. At a pirate-themed preview event last night in New York City, the Pirates of the Caribbean toy assortment from JAKKS Pacific, Inc. and new LEGO(R) Pirates of the Caribbean: The Video Game and construction toys were unveiled before an invitation-only crowd of toy industry insiders as a preview to the upcoming American International Toy Fair. Disney Consumer Products and JAKKS Pacific also presented actor Ian McShane, who portrays new pirate character Blackbeard, with a one-of-a-kind 12-inch action figure inspired by the toy line. The film’s Academy Award-winning production designer John Myhre was also on hand as guests were treated to the reveal of a life-sized figure of Captain Jack Sparrow standing a full six feet tall and made of 150,000 LEGO bricks.

“Disney’s Pirates of the Caribbean is the ultimate pirate franchise bringing to life the fun and adventure in pirate role play that kids just love,” said Jo Pascoe, director of toys at Disney Consumer Products. “With Pirates of the Caribbean: On Stranger Tides, we wanted to bring the entertaining characters and action-packed scenes from the big screen into the home for dynamic and imaginative play. Fans, kids and collectors are in for a treat.”

Releasing in stores beginning this March, the new Pirates of the Caribbean toy line features a robust collection celebrating classic characters including everyone’s favorite scallywag, Captain Jack Sparrow; his right-hand man, Gibbs; and old foe, Barbossa. The line also showcases new characters and themes from Pirates of the Caribbean: On Stranger Tides including the sinister and notorious Blackbeard; a mysterious woman from Captain Jack Sparrow’s past, Angelica; and the Fountain of Youth they desperately seek. Disney will also release a full line of Pirates-themed merchandise in conjunction with the film including publishing, apparel, cosmetics, accessories, and stationery.

Highlights from the new Pirates of the Caribbean toy line include:

Bringing the action from the high seas to the home and proving that ‘not everything is what it seems’ is a captivating line of new toys including figures and playsets with a special black light reveal from JAKKS Pacific (JAKK 17.53, -0.05, -0.28%) . A black light accessory that comes with all 4-inch figures (SRP $7.99), 4-inch Legend Pack figures and accessories (SRP $14.99) and the Queen Anne’s Revenge playset (SRP $69.99) unveils a secret reveal that turns the figures into ghastly zombies. The Queen Anne’s Revenge playset also features authentic cloth sails, a retractable crow’s nest, and cannon with working projectile and launching deck for fun and adventure-packed action on the high seas. JAKKS will also be introducing new strategy-based board games based on Pirates of the Caribbean: On Stranger Tides later this Fall.

The LEGO Group will introduce nine exciting and versatile playsets celebrating key scenes from Pirates of the Caribbean: On Stranger Tides, including a buildable version of Queen Anne’s Revenge (SRP $119.99) and the Whitecap Bay playset ($79.99) where Jack Sparrow and the other pirates encounter mermaids. The line also includes favorite scenes from earlier films in the Pirates of the Caribbean series. Fans will have to snap up all the sets to complete their collection of favorite characters in LEGO form. Disney Interactive Studios and TT Games have collaborated to develop LEGO Pirates of the Caribbean: The Video Game. Based in the world of the globally successful film franchise, incorporating storylines, locations and characters from the first three films, LEGO Pirates of the Caribbean: The Video Game will re-create the action, adventure and memorable moments of the Pirates of the Caribbean mythology in LEGO form, incorporating the humor of LEGO minifigures and fantastic worlds built from LEGO bricks and elements for players to explore. The video game will release in May in conjunction with the film and will be available for the Wii(TM) console, Xbox 360(R) video game and entertainment system from Microsoft, PlayStation(R)3 computer entertainment system, PSP(R) (PlayStation(R)Portable) system, Games For Windows — LIVE and the Nintendo DS(TM) family of hand-held systems.

Produced by Jerry Bruckheimer and directed by Rob Marshall, “Pirates of the Caribbean: On Stranger Tides” captures the fun, adventure and humor that ignited the hit franchise–this time in Disney Digital 3D(TM). Johnny Depp returns to his iconic role of Captain Jack Sparrow in an action-packed adventure. Crossing paths with the enigmatic Angelica (Penelope Cruz), he’s not sure if it’s love–or if she’s a ruthless con artist who’s using him to find the fabled Fountain of Youth. When she forces him aboard the “Queen Anne’s Revenge,” the ship of the legendary pirate Blackbeard (Ian McShane), Jack finds himself on an unexpected adventure in which he doesn’t know whom to fear more: Blackbeard or Angelica, with whom he shares a mysterious past. The international cast includes franchise vets Geoffrey Rush as the vengeful Captain Hector Barbossa and Kevin R. McNally as Captain Jack’s longtime comrade Joshamee Gibbs, plus Sam Claflin as a stalwart missionary and Astrid Berges-Frisbey as a mysterious mermaid.

Disney Consumer Products (DCP) is the business segment of The Walt Disney Company /quotes/comstock/13*!dis/ quotes/nls/dis (DIS 40.53, +0.65, +1.63%) and its affiliates that extends the Disney brand to merchandise ranging from apparel, toys, home decor and books and magazines to foods and beverages, stationery, electronics and fine art. This is accomplished through DCP’s various lines of business which include: Disney Toys, Disney Fashion & Home, and Disney Food, Health & Beauty. Other businesses involved in Disney’s consumer products sales are Disney Publishing Worldwide, the world’s largest publisher of children’s books and magazines, and www.DisneyStore.com, the company’s official shopping portal. The Disney Stores retail chain, which debuted in 1987, is owned and operated by Disney in North America, Europe, and Japan. For more information, please visit www.disneyconsumerproducts.com or follow us at www.YouTube.com/DisneyLiving, www.Facebook.com/DisneyLiving and www.Twitter.com/DisneyLiving.