Marvel has released one of the variant comic book cover arts for the upcoming The Death of Spider-Man saga which is set to begin this month in the newest issue of Ultimate Comics Spider-Man and Ultimate Avengers vs. New Ultimates.

Drawn by Ed McGuiness (Hulk), this variant cover art represents the final issue of the story arc in which the Ultimate Marvel universe is changed forever. 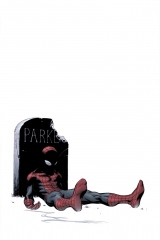