Underground Toys are pleased to announce the release of a new Doctor Who action figure – available exclusively in the US at selected Toys’r’us stores. 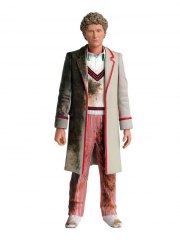 Underground Toys are pleased to announce the release of a new Doctor Who action figure – available exclusively in the US at selected Toys’r’us stores.

Some info about the exclusive item is below & pictures are attached.

This item features an exclusive Underground Toys action figure of the newly regenerated 6th Doctor, as played by Colin Baker, still wearing the mud splashed outfit of his previous incarnation. Change my dear .. and it seems not a moment too soon!

The TARDIS arrives on Androzani Minor, the source of a life-prolonging drug refined from a substance called Spectrox. Production of the drug is controlled by Sharaz Jek, a madman in self imposed exile, who blames Morgus, a powerful industrialist on Androzani Major, for all his misfortunes. The two sides are pitched in a convoluted ongoing war which, unknown to Jek, gives Morgus a monopoly of Spectrox on his planet, Major. Jek becomes infatuated with Peri, and saves her and the Doctor from being executed on Morgus’s orders. However, the two travellers learn that they have contracted spectrox toxaemia, a fatal disease. The only antidote is the milk from a queen bat, which the Doctor must find in the deep caves on Minor. With moments to spare, the Doctor carries Peri back to the TARDIS, where he gives her all the milk he has collected. She recovers, but the Doctor has to regenerate to save his own. 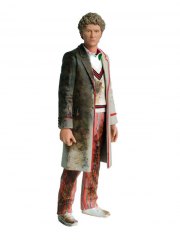