AmiAmi has revealed some final production images of Max Factory’s upcoming Figma Robocop figure. The figure will come with a standard and “Firing” pistol, an alternative “open holster” leg, a battle damage head as well as a data spike fist. The figure is currently available for pre-order and will run you about $32 USD.

Using the smooth yet poseable joints of figma, you can act out a variety of different scenes. He comes with a replaceable ‘damaged’ head for a different appearance. His gun, the Auto 9, is also included, and comes with firing effects to recreate the action from the films. Recreate your favorite shoot-out scene!
A poseable figma stand is included, which allows various poses to be taken.” 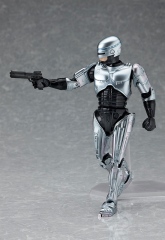