For the first time ever, the Shadow is available as a detailed 1:6-scale figure.

Lamont Cranston, aka the Shadow, fought against evil forces with his mysterious ring, his guns, and two fists! In 1930, The Shadow started out on Detective Hour for American radio and became a world-famous pulp magazine. For the first time ever, the Shadow is available as a detailed 1:6-scale figure.

Now you can fight evil with the Shadow’s poseable scarf and cape, black suit and hat, guns, and holster. Who knows what evil lurks in the hearts of men? The Shadow knows! Limited to 750 pieces worldwide. Look for it to be released in October 2011. 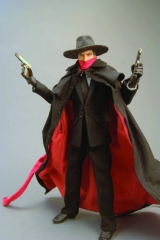