Here are the first set photos from The Farrelly Brothers’ upcoming big screen adaptation of “The Three Stooges.”

Here are the first set photos from The Farrelly Brothers’ upcoming big screen adaptation of “The Three Stooges.” While you can’t see awhole lot, it is your first look at the original bumbling idiots, Curly, Moe and Larry.

Here is a description of the photos from the site:

“The Farrelly Brothers are filming a car crash scene for the upcoming movie in Stone Mountain Park, Atlanta through Wednesday and the cast of the movie was spotted hanging out in the park between takes today… In these exclusive photos you can catch a first glimpse of Will Sasso (left with back to camera below) as Curly, Chris Diamantopoulos (using eye dropper) as Moe, and, of course, Sean [Hayes] (in the middle) as Larry.” 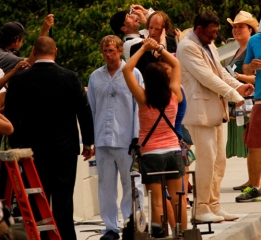 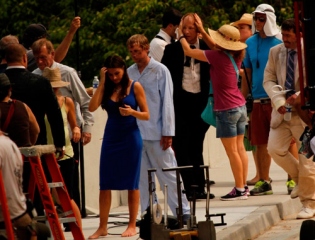