Mezco’s back with another addition to their amazing Mega Scale Thundercats line. Check out a great pic of Panthro and his details after the jump!

We knew that there would be news on a Panthro addition to the Thundercats line from Mezco, but we weren’t expecting to see anything on him until Toy Fair. Luckily, a couple of online retailers have put up the pre-order information, so we wanted to pass it along. 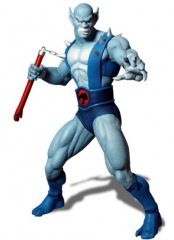 This mega-sized 14 inch scale figure portrays the warrior who is also the chief mechanic/engineer and pilot for the ThunderCats.

Featuring 7 points of articulation this mega figure is superbly detailed, perfectly capturing not only the iconic look of Panthro as he appeared in the classic television series, but the essence of Panthro as he proudly wields his nunchucks in defense of his comrades. He comes complete with an alternate open-pose left hand and his signature chained fighting sticks.

Panthro is packaged in a collector-friendly window box that allows him to watch out for evil as well as to be displayed while remaining Mint In Box.
Product Number: MEZ10747
Shipping Weight: 3.15 pounds