Recreate scenes from the Classic Series of Doctor Who with these 5″ poseable action figures. Featuring the following six characters,modelled accurately on famous villains from past episodes.

Recreate scenes from the Classic Series of Doctor Who with these 5″ poseable action figures. Featuring the following six characters,modelled accurately on famous villains from past episodes.

This set includes the following:

-The Master –the renegade Time Lord, and arch-enemy of the Doctor, as he appeared in ‘The Deadly Assassin’ in 1976. He stands posed and ready to shoot all that defy him.

– Ice Warrior -one of the Doctor’s oldest enemies, first battling against the Second Doctor back in the 1967 story ‘The Ice Warriors’.

– Cyberman -as seen in the 1982 episode ‘Earth Shock’, the Cyberman is armed, and posed ready to attack.

– The Morbius Creature -the brain of another renegade Time Lord resurrected into a ghoulish character that fought the Fourth Doctor, in ‘The Brain of Morbius’ from 1976.

– Voc Robot -from the classic 1977 story ‘Robots of Death’ set on a distant planet where humans mine for precious metals using the Robots for labour. This Voc Robot¹s eyes glow red under a light.

– Mummy with Canopic Jar -coming complete with urn accessories, the Mummy Robot was first seen in 1975’s ‘Pyramid of Mars’, with the Fourth Doctor. 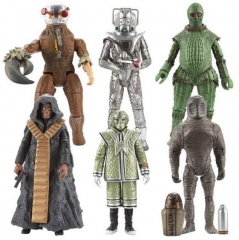