The net’s been buzzing about a Masterpiece-08 Grimlock for a few days now but that rumor is now a reality as first images of the prototype emerges.

The incredibility popular MP Transformer series has just unveiled their eighth collectible Transformer figure, the ever so fan favorite “ARGH, ME,” Grimlock. Perhaps one of the more expensive MPs, MP-08 Grimlock is set at 13,000 yen (~$130 USD) and will be released in March 09.

The figure will have LED light in the right fist for the ability to light up his gun and sword. Moreover, Grimlock can change his eye color in both robot and dino mode.

As a fun extra, Grimlock also comes with a service tray allowing him to be in “Butler mode” as a dinosaur. 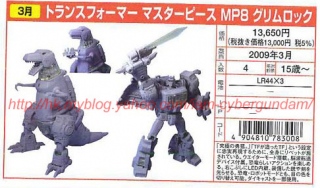 Next up is images of the new Transformers Disney Mickey Mouse. There will be two versions, a colored, which will hit shelves just after Christmas in February 2009, and a black and white version which is slated for a March release.

Priced at $3,990 yen (~$40 USD), this figure will transform from a trailer truck to a robot. When in vehicle mode, Mickey Mouse is in the driver’s seat, and in robot mode, he would be on top of the robot’s head. 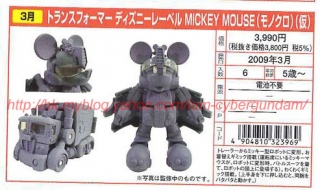 One thought on “First look at the MP-08 Grimlock Prototype and Disney Mickey Mouse Transformer!?”