Courtesy of Mattycollector.com, we have our first official look at the upcoming DCU wave 15 which is expected to hit retailers late this summer. 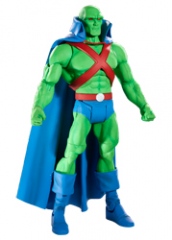 Courtesy of Mattycollector.com, we have our first official look at the upcoming DCU wave 15 which is expected to hit retailers late this summer. According to Mattey, they will be at Kmart in late August/early September, then retailers everywhere in the fall.

Collect all seven figures and you’ll have everything you need to create a villainous Validus Collect and Connect™ figure!

Classic Starman –Traditional version of Starman is well equipped with his Cosmic Rod and a Stellar Energy Pistol. Celestial crime fighting was never so much fun!

OMAC — He’s not bad, he’s just built that way! Cyborg OMAC is rendered in dramatic detail in his first outing as an action figure.

Martian Manhunter — Two versions will be released, so it’ll be your turn to hunt the hunter for both the standard figure and the hard-to-find chase version with Martian head and “weapon” hand!

Raven — Stunning and smart, the Fan’s Choice winner comes to life as a magnificent action figure.

Sinestro Corps Batman — Commemorating his near-indoctrination into the dark side, our hero comes with a transparent Batarang ring construct.

Jemm – We’re fairly certain the Injustice Gang has their eye on MattyCollector.com as the Son of Saturn gets ready to make his first-ever appearance as an action figure.

Validus — Collect all 7 figures above to create this fearsome 9” Collect and Connect™ figure! Validus arrives with a crystal-clear head dome to reveal his heinously huge brain.