From Wolverine and Red Skull busts to a very odd Thor Frog and an awesome Deadpool statue, Gentle Giant is really making the most of their new Marvel license.

From Wolverine and Red Skull busts to a very odd Thor Frog and an awesome Deadpool statue, Gentle Giant is really making the most of their new Marvel license. 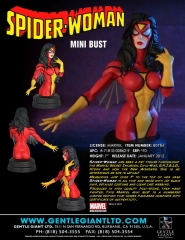 Spider-Woman has been a key figure throughout the Marvel Secret Invasion, Civil-War, S.H.I.E.L.D., Hydra and now the New Avengers. She is as mysterious as she is lethal!
Measuring just over 7“ to the top of her head Spider-Woman is all that and more with jet black hair, detailed costume and clear cast webbing.
Produced in high quality poly-stone, then hand painted. This Marvel mini-bust is a numbered limited edition that comes packaged complete with certificate of authenticity. 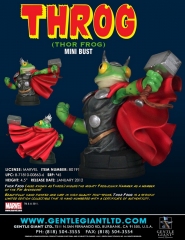 Thor Frog (also known as Throg) wields the mighty Frogjolnir Hammer as a member of the Pet Avengers!

Beautifully hand painted and cast in high quality poly-stone, Thor Frog is a strictly limited edition collectible that is hand numbered with a certificate of authenticity. 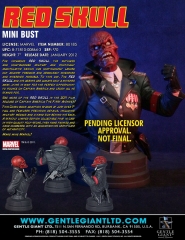 The Infamous RED SKULL, The ruthless and cold-blooded military and politically manipulative genius has continuously lashed out against freedom and democracy whenever and wherever possible. To this day, The Skull and his agents are always only a whisper away, lying in wait for the perfect opportunity to pounce on Captain America and crush all he stands for.
See more of the Red Skull in the 2011 film release of Captain America: The First Avenger!

This Comic book adaption stands at just over 7” tall and features precision details, including military medals and a hand gun behind his back.
A strictly limited edition collectible that is cast in high quality poly stone, then hand painted and hand numbered, with an accompanying certificate of authenticity.
Make mine Marvel! 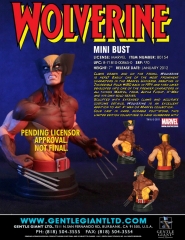 Claws drawn and on the prowl, Wolverine is here! Easily one of the most prominent characters in the Marvel Universe, debuting in Incredible Hulk #180 back in 1974 and then later developed into one of the premier characters in all things Marvel, from, Alpha Flight, X-Men and his own solo series.
Sculpted with extended claws and accurate costume details, Wolverine is an excellent addition to any X-men or Marvel collection.
Cold cast in hard, durable poly-stone, this limited edition collectible is hand numbered with a matching certificate of authenticity. 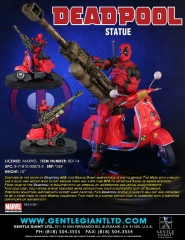 Inspired by the cover of Deadpool #68, this Gentle Giant master piece is one to behold. The Merc with a mouth has a slick new motor-bike to get around town and a big time BFG to let anyone know he means business.
From head to toe Deadpool is sculpted with an arsenal of accessories and lethal accoutrements.
This cold cast, poly-stone statue features more details than your girlfriend’s copy of Glamour.
Precision sculpting, matched with expert hand painting. This Deadpool statue is sure to sell out and promises to be a prize piece in your Marvel collection. This piece is a limited edition that is and numbered with a matching certificate of authenticity.