The McQuarrie Concept Darth Vader Mini bust will feature three different interchangeable heads and in color. The image below is of a rare bronze version that was given to G4 as a contest giveaway. It’s 1 of 1, so fans are just going to have to stick with the exclusive colored ones. 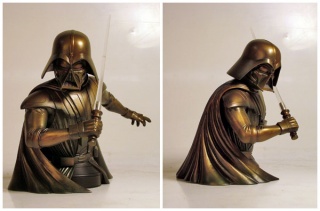