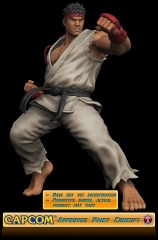 SOTA Toys just announced their upcoming 10th anniversary Ryu statue and as a Street Fighter fanatic, this is probably the best looking Ryu I’ve ever seen! SOTA Toys has really out done themselves with this one.

From SOTA:
For SOTA Toys 10th Anniversary we’re producing an 18 inch statue of Ryu. This one is going to be impressive, and we’ll keep updating as we make more information available.

We’re looking at a release date of 3rd quarter 2010, but we’re still in the early production states so stay tuned for more info!

We’re doing something special with this one, incorporating more electronics and effects than we’ve attempted in all of our other statues combined. This statue will be a culmination of 10 years of experience and will be guaranteed to impress.

We’re about to have this sculpt outputted, and then it’s off to produce the thing. Until then, enjoy some images! 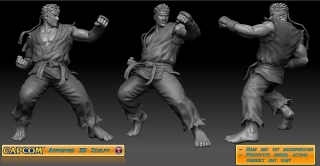