Get a Jump On The Holidays with Entertainment Earth’s 38 Days, 38 Deals!

get a jump on the holidays now!

This isn’t a sponsored post, but we were talking to the gang over at Entertainmentearth.com and we thought that their new promotion was worth showing to you. Right now, they are in the middle of their 38 days of 38 deals. They’ve got massive deals that are sometimes as deep as 80% off leading up to the holidays. Today, they’ve got a cool Mario statue at 60% off. What really excites me is that later this month, they’ll be hosting a deal on Kotobukiya’s Killing Joke statue. I’ve been wanting that one for a while, but couldn’t afford it at retail price.

Check out the calendar below and then head over there and see if you can get in on the deals. Just to repeat, this isn’t a sponsored post. We just thought it was a great way for you to get some new toys without having to empty your wallets. 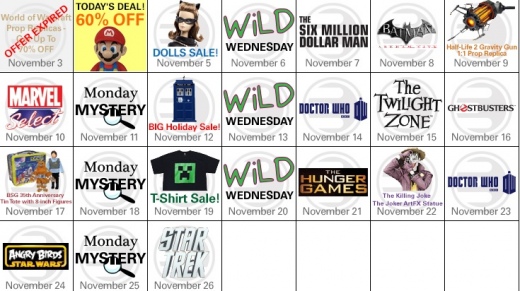