Mari has a really unique style that brings great depth to her character and the folks over at inner sanctum did a bang up job of bringing her art to life.

Mari Inukai is an amazing artist who I had the pleasure of meeting last year at Comic Con. We actually did a really great interview with her that I had hoped to bring you right after the con, but microphones and and a room full of 50,000 fans don’t really go well together and I couldn’t hear a single word that either of us had said. We’ll get another interview with her soon, but until then you really need to check out her amazing new Sekaiseifukudan series.

If you are going to be in LA on May 7th, you are going to want to go to the launch event for the line at Giant Robot. I’m jealous that I’m stuck over on the east coast or I would absolutely be there front and center to pick up a set of the sure to sell out Sekaiseifukudan figures.

Mari has a really unique style that brings great depth to her character and the folks over at inner sanctum did a bang up job of bringing her art to life. 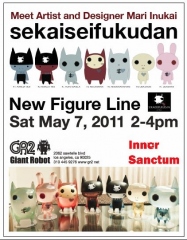 Giant Robot is proud to host a signing by Mari Inukai whose Sekaiseifukudan series is set to launch on that very day, Saturday May 7th.

Designed by Mari Inukai, 7 different figures were meticulously created by Inner Sanctum in methods new to the toy making world. These pieces are treated like works of art, and we will also have rare and exclusive versions as well.

This special event will take place on May 7 from 2-4 p.m.

Mari Inukai is an artist born in Japan who came to America in 1995 to pursue her art. She has worked in animation, clothing design, and shows her work in numerous galleries.

Giant Robot was born as a Los Angeles-based magazine about Asian, Asian-American, and new hybrid culture in 1994, but has evolved into a full-service pop culture provider with shops and galleries, as well as an online equivalent.