At Star Wars Celebration V in Orlando this weekend, “The Daily Show’s” Jon Stewart had the chance to interview “Star Wars” creator George Lucas. For his unadulterated geekiness and involvement, Hasbro created a unique one-of-a-kinda Star Wars figure for Stewart, which Lucas presented to him.

What Stewart received was a 3.75″ Jon Stewart Stormtrooper action. The special figure came packaged on a unique blister card and came with two interchangeable heads sculpted in Stewart’s likeness (goatee and clean shaven). To top it all off, it even came wit ha removable helmet. The figure which isn’t for sale, is by all means similar to the George Lucas Stormtrooper figure released awhile back.

Here are some hi-res images for the super rare Jon Stewart Stormtrooper action figure. I think it will now give Mattel’s Holiday Hal Jordan Green Lantern JLU figure a run of its money in terms of rareness and desirability. 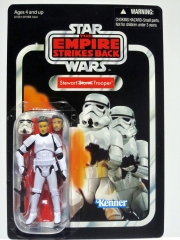