While not a lot was revealed, we did get to see a new image of the upcoming “Avengers” Hulk figure as well as learn more about what fans can expect this Spring!

Today Marvel held a special liveblog giving fans a new look at Hasbro’s official “Marvel’s The Avengers” action figures. While not a lot was revealed, we did get to see a new image of the upcoming “Avengers” Hulk figure as well as learn more about the figure creation process and what we can expect when the line hits retail this spring:

– Scale will be respected. The new Hulk figure will be bigger than the rest of the figures in the line.

– There will be multiple scales of action figures from 3 3/4in to 6″ Marvel Legends. They will have their usual 11 to 17 points of articulation depending on the figure and their feature/function.

– Hasbro has over 15 different figures planned for their AVENGERS 3 3/4 in product line, which will always be in scale with the Marvel Universe figures.

– The Avenger figures will all be 3D scan captured. But additional sculpts will be made in order to make the scans more accurate and similar to the actor’s likeness.

– Fans can expect a majority of movie related figured, but there will be some classic characters thrown in for Marvel fans. Variants are expected, although nothing was revealed.

– There will also be exclusives, which will hit store shelves this Spring… probably late April/March.

– Fans of vehicles are in luck. There will be more vehicles than ever. “The new AVENGERS movie has given us some great material to work with.”

– There will also be new Superhero Squad packs and figures in Hasbro’s movie lineup. 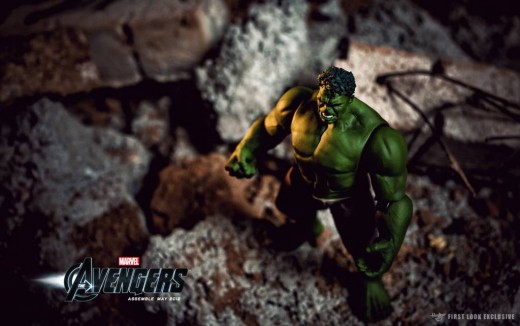