Before you ask, yes, there is an actual “invisible” jet and not just the empty box that was popularized by an April Fools joke.

Here’s the official image for Mattel’s forthcoming San Diego Comic-Con 2010 Hot Wheel Wonder Woman’s Invisible Jet exclusive. As you can see, there is an actual “invisible” jet and not just the empty box that was popularized by an April Fools joke. Get yours only at SDCC!

Here’s the official word from Matty’s Facebook:
On April 1st, Hot Wheels sent a message to Facebook fans (http://Facebook.com/HotWheels) saying that the brand was going to show them a sneak peek of one of our 2011 New Models. The image that we posted was of Wonder Woman’s Invisible Jet. The response to the joke was so positive that the fans asked for the brand to actually make it for real. So, just in time for DC Comics’ 75th Anniversary, Hot Wheels presents Wonder Woman’s Invisible Jet! Get it fast before it disappears! 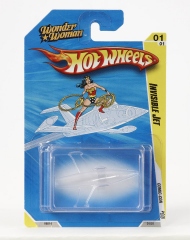