Dave Prowse, who wore the Darth Vader costume in the first three “Star Wars” films, has been allegedly banned from the Lucas Film Star Wars Celebration party in Orlando, Florida. 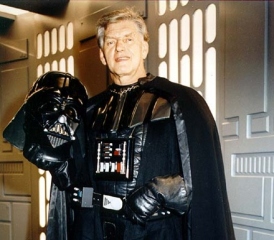 Dave Prowse, who wore the Darth Vader costume in the first three “Star Wars” films, has been allegedly banned from the forthcoming Lucas Film Star Wars Celebration party in Orlando, Florida. Not only that, he’s been told his presence won’t be welcome at any Lucas Film/Star Wars-related events.

Prowse announced on his website: “It is with regret that I have been informed by my friends at C2 Ventures, Ben and Phillip, that I am not to be invited to C5 this year or any other Lucas Film associated events. After enquiring, the only thing I have been told is that I have ‘burnt too many bridges between Lucas Film and myself’ — no other reason given …”

Me thinks this might have something to do with his comments he made to SlashFilm about not receiving any residual payment for “Return of the Jedi” — because it was not profitable:

“I get these occasional letters from Lucasfilm saying that we regret to inform you that as Return of the Jedi has never gone into profit, we’ve got nothing to send you. Now here we’re talking about one of the biggest releases of all time …”

Hmm, it seems as if the Dark Sith himself has only himself to blame for opening complaining about money issues. Even Vader himself is getting squeezed by the true Empire.

Hopefully as Moviefone quips, “there won’t be another re-release of the original film with Prowse’s presence completely replaced by a digital Vader.” Because you’ll never know, it could happen if Prowse continues to be so outspoken.