The HOPE Edition, designed by Nelson Asencio, is a tribute to Shepard Fairey’s iconic poster, which helped ignite and unify the movement behind Obama. The Inaugural Edition was designed by Jailbreak’s own J*Rock as a way to celebrate what’s about to become the biggest Inauguration Party of all time! (4,000,000 people headed to DC on January 20!)

Each edition is limited to 3,000 pieces and every individual box is uniquely numbered. (X of 3000)

The 6” figures have eight points of articulation and are numbered and packaged in an illustrated window box. 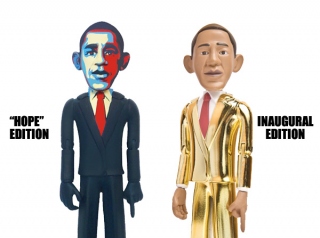