Here is your first look at Jakks Pacific’s upcoming Smurf Movie figures that are based on the new live-action film.

Smurf Movie basic figure two-packs. There are four sets total in series 1 and they include:

In addition to the two-packs, Jakks will also be releasing a Smurfs Movie Magic Moments Gift Packs which includes the following: 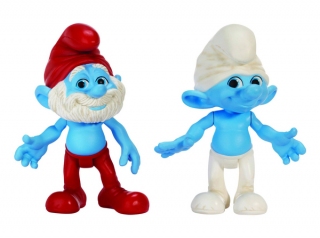