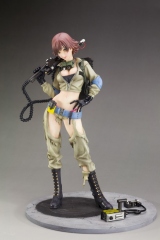 A Kotobukiya Japanese import! The Ghostbusters, New York’s very own paranormal investigators, are back in the headlines and this time around they have a new recruit, Lucy. This Ghostbuster-in-training is determined not to let any spook, specter or ghost get past her and she has the equipment to back her up. Outfitted in Egon Spengler’s proprietary Proton Pack and Ecto Goggles, she is truly a slime-eradicating force to be reckoned with!

Standing triumphantly over a ghost trap after bagging her latest catch, Lucy lets loose a smile of satisfaction over another job well done. She rests the wand of her proton pack on her left shoulder while her other hand sits calmly at her exposed hip. Her uniform has definitely seen better days as her pants are torn and tattered from this recent spectral encounter. The standard issue Proton Pack has thankfully remained unscathed exhibiting incredibly sculpted details such as the power cell, crank generator and Cyclotron.

Ghostbuster Lucy is the latest entry to the Japanese Bishoujo (pretty girl) collection based on an original character design by master illustrator, Shunya Yamashita. Sculpted by Masahiro “Gill Gill” Takahashi, she stands nearly 9 ½ inches tall (in 1/7th scale) atop a specially designed base uniquely accented with a manhole cover donning the Ghostbuster logo. When supernatural activity is afoot, this is the gal you want to call!