Binary brings back the power, beauty, and grace of Ms. Marvel with a fantastic new look. The magnificent superheroine displays that strength and power as she casually rises into the air, supported by just one shapely leg as she flies off from a rocky landscape. 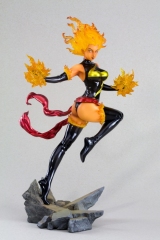 A KOTOBUKIYA Japanese import! The popular Marvel Bishoujo collection (combining iconic superheroines and villains with traditional Japanese stylings) continues to bring you the amazing beauties of the Marvel Comics universe as you’ve never seen them before. Next up in this line is a stunning new variant on an existing heroine, MS. MARVEL BINARY VERSION! With a long history stretching back to the 1960s, Carol Danvers gained superhuman powers from an alien explosion, leading to her costumed identity as Ms. Marvel. After losing her powers for a time, Danvers gained a whole new array of abilities and a new look when she drew upon a white hole’s energy. With her new identity as Binary she would have many adventures on Earth and beyond, later returning to her Ms. Marvel persona. Based on the first Ms. Marvel Bishoujo Statue, Binary appears in the Japanese Bishoujo (pretty girl) style based on an original character reinterpretation by illustrator Shunya Yamashita.

Binary brings back the power, beauty, and grace of Ms. Marvel with a fantastic new look. The magnificent superheroine displays that strength and power as she casually rises into the air, supported by just one shapely leg as she flies off from a rocky landscape. Her dynamic pose captures her with her arms outstretched and one leg bent at the knee, which combined with the other pointing straight down serves to highlight the incredible beauty of her physique. Binary’s sexy costume is recreated with the glossy black and gold bodysuit with matching black boots and gloves, while her metallic red waist cloth whips in the air behind her with a great fabric texture. All of that contrasts nicely with her all-new orange skin tone and translucent flame effects on her legs and arms, not to mention the explosive inferno of her hair! Binary’s newly designed face is otherworldly and beautiful at the same time.

Sculpted by Kouei Matsumoto, Ms. Marvel Binary Version stands slightly over 10 inches tall (in the Marvel Bishoujo 1/7th scale) atop her exclusive rocky display base. As a special bonus, she comes with energy burst effects that you can attach to her hands! Binary will have a limited production run of 2,000 pieces, so don’t miss out on your chance to upgrade your collection with this new version of the classic hero.