Always confident in the face of overwhelming odds, Gambit shows he’s ready for action in the midst of a particularly harrowing training session. 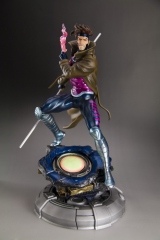 Next up in the amazing X-Men Danger Room Sessions Fine Art Statue series is the renowned Cajun thief and mutant hero GAMBIT! Born Remy Etienne LeBeau in New Orleans and kidnapped into the Thieves’ Guild, Gambit had to grow up tough and clever. Of course, his mutant powers also helped; he is able to charge objects with bio-kinetic energy. Gambit keeps an array of items with him that he can use in battle, but his signature weapons are his staff and a seemingly endless supply of playing cards. Despite, or because of, his troubled past and occasional relapses, Remy is one of the most popular characters in the Marvel Universe and an X-Man in good standing. Being a member of the team means that Gambit has seen his fair share of training exercises in the Danger Room. Ever since the early days of Marvel Comics’ mutant adventures, “X” teams have trained together in the ultra high tech facility known as the Danger Room, equipped with state of the art adaptive combat and athletics routines that challenge each participant in unique ways. The training facility has been featured prominently in X-Men comics over the years, as well as in various cartoons and the third X-Men film.

Always confident in the face of overwhelming odds, Gambit shows he’s ready for action in the midst of a particularly harrowing training session. Garbed in his unique metallic blue, purple, and silver costume, the X-Man stands tall in a battle-ready stance with his signature brown overcoat whipping in the air behind him. Gambit carries his two favorite weapons with his bo staff in his right hand and a trio of playing cards fully energized (via a stunning translucent pink effect) in his left. The mutant hero’s sculpt is top notch, bringing to life every element of his clothing and his athletic physique. Gambit’s wild hair erupts from the top of his open-faced cowl, while his face captures the character’s devil may care smile perfectly.

Sculpted by Erick Sosa, the “Ragin’ Cajun” stands 11 inches tall, in perfect 1/6th scale with the other Danger Room Sessions members (Wolverine, Psylocke, and Colossus). Also like them, Gambit is poised on a unique Danger Room holographic environment base. The wily and cocky Cajun has never looked cooler, and is the perfect addition to the Danger Room Sessions lineup!