You’ve got to take a minute and check out the light up features on the new Darth Vader statue! 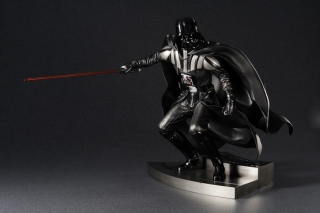 A KOTOBUKIYA Japanese import! Kotobukiya’s amazing line of Star Wars ARTFX Statues is back, bringing the heroes and villains of the Star Wars universe to life in dynamic 1/7th scale statues. The line’s return is heralded by none other than the Dark Lord of the Sith himself in an all new presentation, DARTH VADER RETURN OF THE JEDI VERSION!

At the height of his power, Darth Vader wields his crimson lightsaber in mortal combat against anyone foolhardy enough to challenge the might of the Galactic Empire. His classic armored suit has every detail you’ve come to know and love since Return of the Jedi was first released 27 years ago. Intricate sculpting brings out the different parts of his chest piece and belt module, while Vader’s long cape flows around him in the heat of battle. Of course, the all-important iconic helmet and lightsaber were painstakingly recreated. With his knees bent and weapon extended in his right hand, Vader is ready for anything, even upstart Jedi Knights. Best of all, this amazing new version of the villain has multiple light-up parts via LEDs in his helmet, chest, waist, and lightsaber!

Darth Vader stands 11 inches tall (1/7th scale) atop an exclusive Death Star panel display base. With his fantastic battle pose and light up parts he’ll be the perfect centerpiece to any Star Wars collection! 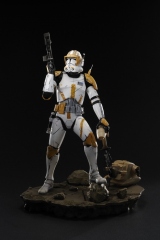 A KOTOBUKIYA Japanese import! The recently resurrected line of Star Wars ARTFX Statues (bringing the heroes and villains of the Star Wars universe to life in dynamic 1/7th scale) continues with one of the most popular characters from the prequel films. A leader of clone troopers and friend to Obi-Wan Kenobi until Order 66, here comes Episode III: Revenge Of The Sith COMMANDER CODY! Designated unit 2224, the clone trooper who would one day play such a prominent role in history excelled in an advanced training program and was able to give himself a name: Cody. He quickly rose through the ranks, eventually leading the orange-accented 212th Attack Battalion alongside Jedi Master Obi-Wan Kenobi. His most fateful battle would take place on Utapau, where the Clone Commander would turn his sights from General Grievous to Kenobi himself!

Commander Cody is instantly recognizable even among countless clone troopers by his unique armor modifications and color scheme. His complex helmet and shoulder-mounted antenna feed him up to the minute battle data, while the orange and white proudly pronounce his membership in the 212th. Paying homage to Cody’s switch in allegiance, his ARTFX Statue comes with two unique display modes. The first depicts the commander before Order 66, standing triumphant on the field of battle with his blaster at the ready. Cody scans the scene before him looking for any final opponents while dangling from his left hand are the remains of the last one: the severed head of a battle droid! If you prefer the commander working for the dark side, swap out parts to portray him in the final moment before turning on Obi-Wan. This Cody looks down at a hologram of Emperor Palpatine that glows with a bright LED light! He even wears the Jedi’s lightsaber on his belt as the character did in that specific scene.

Commander Cody stands on an exclusive Utapau georama base. The battlefield at his feet is littered with debris and battle damage, not to mention battle droids blasted to scrap!