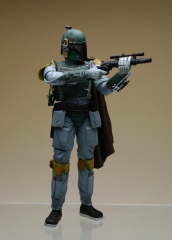 A KOTOBUKIYA Japanese import! The hit line of smaller scale Star Wars ARTFX+ Statues is back, and this time it’s bringing to life characters from the original films in the all new Saga Collection! First up is the most notorious bounty hunter in the outer rim, BOBA FETT CLOUD CITY VERSION. Appearing as he did in Empire Strikes Back, Fett works with Darth Vader to capture the Millennium Falcon and collect on the bounty for Han Solo. 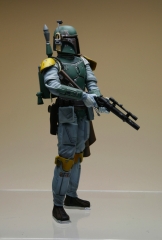 Cold and calculating, Boba Fett is never encountered without his full suit of Mandalorian armor and trusty blaster rifle. The armor plating over a full-length bodysuit clearly shows the wear and tear of a life of crime, along with all of the personal touches added by Fett over the years like the cape and unique built in weaponry. The bounty hunter is a perfect likeness of the character from the film, down to the colors on his armor and the crucial dent in his helmet. Poseable in two ways (holding his gun at ease or aimed at his quarry), Fett comes with two different interchangeable arms and magnets in his feet for display on the included base!

A KOTOBUKIYA Japanese import! Star Wars ARTFX+ Statues bring you all of the quality and detailing that you expect from an ARTFX release in a great smaller scale perfect for collecting! With the new Saga Collection in full swing Boba Fett is joined by a fantastic new set, the STORM TROOPER BUILD PACK. As any fan will tell you, the only thing cooler than one of the faceless soldiers of the Empire is having two of them! 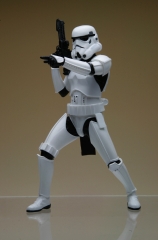 Wrapped up in shiny white armor and following the orders of Emperor Palpatine and Darth Vader to the letter, the Storm Troopers project the Empire’s might into every corner of the galaxy. Rarely found alone, the Troopers attack en masse to swarm their foes with superior numbers. Joining the ARTFX+ line, these two Storm Troopers are perfect miniature versions of the onscreen characters, with fully detailed armor and weapons. In fact, they both come with interchangeable four different kinds of arm parts and two different style of leg parts! So giving you the option of eighteen different posing combinations! Like the other ARTFX+ Statues the Troopers also have magnets in their feet for display on included bases.

ARTFX+ Statues are fun-to-assemble pre-painted snap-fit kits that can be easily put together in seconds without glue or modeling skill. The Storm Troopers stand nearly 8 inches tall (1/10th scale) and are perfect back up for the Saga Collection Boba Fett ARTFX+ Statue! 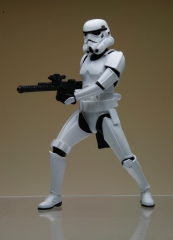