The fearsome predator stands ready for battle, his left hand balled into a fist and his right splayed open with claws at the ready. Creed’s face is a mask of rage with his fangs bared in a vicious snarl. 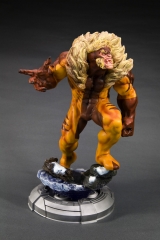 A KOTOBUKIYA Japanese import! The third member of the elite X-Men Danger Room Sessions Fine Art Statues in the Marvel Comics Presents Kotobukiya Collection is none other than the most vicious mutant of them all, SABRETOOTH! With similar powers and abilities including a healing factor, superhuman senses, and claws, Victor Creed was a longtime rival of Wolverine. Truly a feral mutant, Sabretooth relishes close-quarters combat where he can put his fangs, claws, and great strength to good use, trusting his amazing regenerative healing to keep him safe. Though usually against the side of good, Creed has on occasion teamed up with the good guys, including the X-Men, when a greater threat presented itself. Ever since the early days of Marvel Comics’ mutant adventures, “X” teams have trained together in the ultra high tech facility known as the Danger Room, equipped with state of the art adaptive combat and athletics routines that challenge each participant in unique ways. The training facility has been featured prominently in X-Men comics over the years, as well as in various cartoons and the third X-Men film.

Inspired by Jim Lee’s 1990’s era X-Men, Sabretooth embodies animalistic aggression! The fearsome predator stands ready for battle, his left hand balled into a fist and his right splayed open with claws at the ready. Creed’s face is a mask of rage with his fangs bared in a vicious snarl. The mutant’s costume is authentic to the last detail, with the iconic brown and yellow tiger-striped bodysuit and massive fur collar. Sabretooth has an incredible sculpt, highlighting his powerfully muscled physique. Creed’s expression and body language just scream “bring it on,” daring the Danger Room to take him on!

Sculpted by Erick Sosa, Sabretooth stands nearly 14 inches tall (in 1/6th scale with the other Danger Room Sessions members Wolverine and Psylocke)! Beneath his feet is an amazing exclusive base consisting of snow-covered rocky terrain on top of a mechanical projector. Every mutant in the Danger Room Sessions series is mounted on a unique Danger Room holographic environment with translucent parts that glow with a built-in LED light in the base.