From Star Wars to Iron Man and a whole lot of cool Japanese stuff you’ve never heard of, check out the cool toys that will be draining your wallet in the next few months.

From Star Wars to Iron Man and a whole lot of cool Japanese stuff you’ve never heard of, check out the cool toys that will be draining your wallet in the next few months.

After surviving imprisonment by terrorists, billionaire industrialist Tony Stark created the Mark II armor suit. This was followed up soon after by the iconic red and gold Mark III suit used to battle Stane and his Iron Monger suit at the culmination of the first film. In the sequel the ever-productive Stark improves on his own designs yet again, creating not only additional Iron Man armors but also the famous War Machine! The absolute cutting edge in high-tech personal armor suit and man-sized weaponry, sleeker and more powerful than the previous versions, the Mark VI is visually impressive and will look great in your collection!

Iron Man stands nearly 14 inches tall (1/6th scale) atop an exclusive cylindrical Repulsor Transmitter base. Like the previous Iron Man ARTFX Statues, the Mark VI includes LED lights in the eyes, chest, fists, and base! In addition, the Mark VI has been further refined with a stronger LED light sequence, sharper edges on the base, and increased paint applications. The Mark VI constructed of high-quality cold cast porcelain, is individually numbered on the bottom of the base as part of a Limited Edition. An amazing statue on its own, the Mark VI is also a perfect companion piece to the armors from the first film! 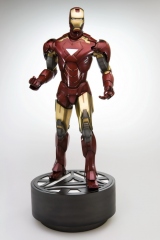 MARVEL COMICS PRESENTS: THE KOTOBUKIYA COLLECTION
VILLAINS SERIES DOCTOR DOOM FINE ART STATUE
A KOTOBUKIYA Japanese import! Soon after the Fantastic Four hit the comic book scene in 1961, the superhero team came face to face with someone who would become one of the most iconic supervillains of all time. Power-mad, brilliant, and deadly, the dictator of Latveria would plague the heroes of the Marvel Universe to the present day. Born Victor von Doom, the ambitious master of both science and sorcery would come to be known as DOCTOR DOOM! Doom was injured by an explosion and forced to wear a mask over his face that would become his trademark along with heavy-duty armor and striking green clothing.

Dr. Doom is the second member of the Marvel Villains lineup of Fine Art Statues after the monstrous Venom. The Latverian is no less imposing, the picture of supreme supervillainy standing tall with crossed arms in his silver armor and green cape. Every detail has been painstakingly recreated, from the tiny rivets on the Doctor’s armor plates to the billowing folds of his clothing and hood. Of course, no Dr. Doom would be complete without his frightening mask, and Doom does not disappoint. In fact, Victor comes with two alternate (and both comic accurate) mask designs for a fantastic level of display options! The gleaming silver of Doom’s armor is offset by the deep green of his cape and hood, instantly recognizable on this new Fine Art Statue.

Dr. Doom tops out at a huge 15 inches tall (1/6 scale) in his regal pose, and will be a dominant force in your collection. Like the other statues in the Marvel Villains line, Doom stands upon a specially-designed circular base that lights up with interior LEDs. Sculpted by Eric Sosa, a member of Kotobukiya’s newly-formed “Kreative 3” Team, Dr. Doom is constructed of high-quality cold cast porcelain! 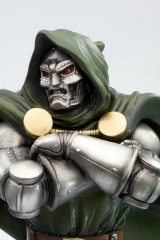 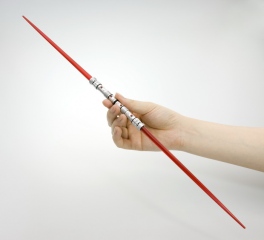 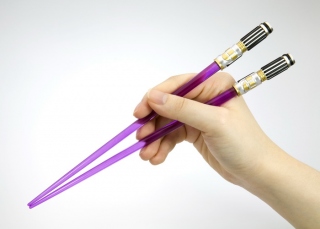 PATLABOR THE MOBILE POLICE ~ SHINOHARA AV-98 INGRAM 1 D-STYLE MODEL KIT
A KOTOBUKIYA Japanese import! From the world-renowned classic manga and anime franchise Patlabor comes an all-new take on the iconic robot, the SHINOHARA AV-98 INGRAM 1 D-STYLE! Replicating the powerful police patrol unit in an original super-deformed version, this is one model kit no Patlabor fan will want to miss.

The Ingram 1 D-Style model kit captures the look of the original mecha with stunning detail in a cute little package. With 60 pre-painted parts and easy snap-fit assembly, no glue or paint is necessary! In addition to the classic black and white color scheme, the Ingram also has several tampo print logos. While it may be small, this “labor” is armed for bear with a stun stick, 37mm revolver cannon, and riot shield. Standing just over 4 ¼ inches tall, this little robot has approximately 15 points of articulation. Don’t miss out on the Patlabor Ingram in a new great size that’ll fit in any collection! 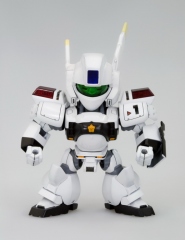 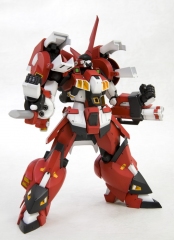 ARMORED CORE LINEARK WHITE GLINT & V.O.B. FINE SCALE MODEL KIT
A KOTOBUKIYA Japanese import! The number one robot from Armored Core For Answer is back in the biggest and baddest version ever, WHITE GLINT & V.O.B.! Paired with its massive booster engines, the White Glint is fully transformable into its flying configuration without removing any parts. Other than the enormous booster (which can attach to any robot in the Armored Core series), the main hero robot also comes armed with multiple weapons including hand guns, a rocket launcher, missile launcher, energy cannon, and more! Standing approximately 7 inches tall (1/72nd scale), White Glint & V.O.B. together are comprised of 800 parts, and the robot has 30 points of articulation. AC kits require easy snap fit assembly with included pictorial assembly instructions and do not need to be painted. 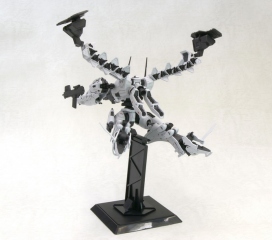 ARMORED CORE LINEARK WHITE GLINT SD-STYLE MODEL KIT
A KOTOBUKIYA Japanese import! “SD-Style” is Kotobukiya’s new plastic model kit series featuring various mecha rearranged into stylized miniature versions. Collect your favorite robots in a high quality compact scale with great quality and an unbeatable price. It’s appropriate then that the first unit in the series is the main character robot from Armored Core for Answer, WHITE GLINT SD-STYLE! It may be small, but the little mecha is intricately detailed down to its signature camera eye. Like its larger brothers, White Glint is easy to assemble with snap fit parts that don’t require any glue, and it’s even pre-painted in the movie colors! The tough but tiny Core is equipped with its heavy weaponry as well, including the 051ANNR Rifle, EB-0305 Assault Rifle, and SALINE05 Shoulder Missiles. Additional parts let you display White Glint with its boost hatches open or closed! Standing only 4 inches tall, the SD-Style robot is comprised of approximately 80 pieces and has 14 points of articulation. 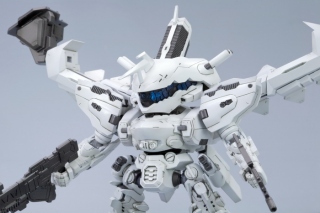 BAKEMONOGATARI ~ HITAGI SENJOGAHARA ANI*STATUE
A KOTOBUKIYA Japanese import! From the smash hit anime series Bakemonogatari comes the main heroine HITAGI SENJOGAHARA! Posed atop a translucent “omoshigani” monster-inspired base, the mysterious weightless girl floats in the air with a stunning grace. Dressed in a school outfit with long shirt and pleated skirt in purple and pink complete with matching tie and black stockings, Hitagi looks beautiful with a traditional “tsundere” character face that’s a bit sharp yet seductive at the same time. Her long flowing purple hair adds a heightened sense of movement to the already dynamic figure, and she even has a ruler and ball point pen in her shirt pocket! You can display Hitagi with or without her trademark stapler in her hand. Sculpted by Shiketaudonko, Senjogahara stands 8 ½ inches tall (1/8th scale) and is constructed of high-quality pvc plastic. 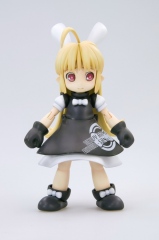 ONE-SHOT BUG KILLER!! INTERCEPTOR DOLL HOIHOI-SAN HEAVY ARMS – NIGHTMARE – PLASTIC MODEL KIT
A KOTOBUKIYA Japanese import! You wanted it, and now you’ve got it. The number one Interceptor Doll is back in the coolest version yet, HOI HOI-SAN HEAVY ARMS NIGHTMARE 1:1 scale model kit! Like the previous “Heavy Arms” version, this Hoi Hoi-san wears her traditional cute maid’s outfit with matching slippers and bunny ears, but this time it’s in the “Nightmare” black and white color scheme with pink and red eye decals! The diminutive bug killer comes with two different faces – one happy and one angry for furious combat and her accessories include the massive Hoi Hoi Hammer, heavy machine gun, and “Bug Killer” bottle. Sculpted by Misono Auto, Masatoshi Aoki, and Yuta Itoyama, Hoi Hoi-san is comprised of approximately 130 pieces, and can be painted in any way you’d like! The little robot has 25 points of articulation for excellent posing, and she comes with special decals for her eyes and the logo on her skirt. And if that wasn’t enough, the Nightmare version even comes with an exclusive poster! 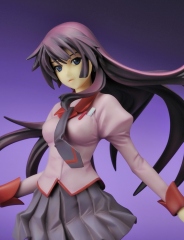