Is this statue for everyone? Probably not, but is it a must have for Shining Wind fans and anyone with a French Maid fetish? Absolutely. 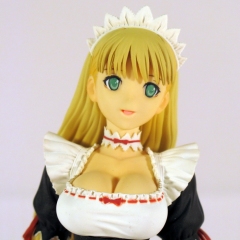 OK, we’ve got a great piece to review today from our friends over in Japan, Kotobukiya. Now, when we are dealing with a new toy from Japan, there is a pretty solid chance that it is going to be from an anime that we know absolutely nothing about. We’re betting that a lot of you just clicked on the link because the cleavage caught your eye and you’ve got know idea what Shining Wind is either.

No worries, that’s why the great Flying Spaghetti Monster in the sky invented Wikipedia. From what we’ve gleaned from the net’s most “reliable” source, this ridiculously polysyllabic character, “Clalaclan”… (Sounds a little bit like Xena’s old Battle Cry), comes from the Japanese Playstation game, Shining Wind, and its spin-off cartoon, Shining Tears X Wind. A side note for all the anime art fans, all the character were designed by Tony Taka. 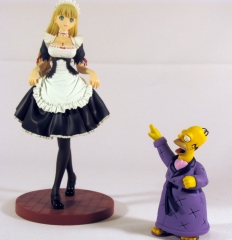 Now, let’s cover what we know about the actual statue before we dive into the review. This particular statue is of the main heroine from the Shining Wind Series, Clalaclan (Say out loud five times fast and see if you can keep from giggling). The 7.5” PVC statue is in an outfit that was designed by Tony Taka, but the entire piece was sculpted by Yuzo. For you scale junkies out there, Clalaclan is in 1/8th scale.

Ok, so now let’s get down to the nitty gritty. Is this statue for everyone? Probably not, but is it a must have for Shining Wind fans and anyone with a French Maid fetish? Absolutely. Now, speaking of the latter issue, it is important to know that while there is some visible lingerie on the figure, Kotobukiya is one of the few Japanese companies that does not believe in taking their toys down to the full monty. It’s actually rather refreshing. It reminds me of the US Statue company, Reel Art Studios, who once told me that they “don’t do nudity, they do cheesecake.” Check out any of their awesome pin-up statues and you’ll see what they mean. So, we’ve established that there’s no nudity, but is there quality? As our favorite Alaskan governor would say… Youbetcha!

For me, there’s two styles of anime. Real anime and chibi. I’m not gonna lie. I hate chibi. Over-simplified art that makes every character look like a five year old version of themselves if their mothers drank during pregnancy. Now, real anime art, like what Taka and Yuzo have created with this figure is a thing of beauty. They take the least amount of lines possible and bring forward something that is full of life in a way that Alex Ross could never achieve with his ultra-realism.

Moving on to painting and sculpting, there’s no complaints here. The paint is clean and sharp and the sculpting has more detail than you’d expect. The ruffles in the dress, the attention to little touches like her ribbons and her eyes… this statue is done extremely well. 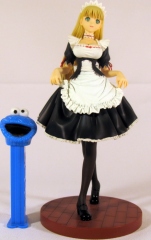 Now, it wouldn’t be an Anime figure if at least some of its clothing didn’t come off, right? Clalaclan is no exception in that department… to a degree. As you can see in the gallery below, She does come apart for some outfit removal. You can take off the apron and you can take off the skirt, but do not try to take off her blouse or you will have yourself one extremely broken figure. Now, why did they decide to expose her panties and not her bra? Beats me. If there was actually any part of the figure that I can’t say really impresses me, it would be that. Not that I’m dying to see this statue in full on Victoria’s Secret mode, but She’s going to look a little bit silly if someone decides to show her off on their shelf bottomless. I’m just saying… kinda weird.

Do I recommend this statue? If you are a fan of the game or anime, absolutely. Now, here’s the bonus recommendation. If you are a female and want this statue, have at it. However, there are actually some of us guy collectors out there who have to contend with ladies in our lives. If you have a taste for the anime women, but are sick of your girlfriend pestering you about all the naked plastic in your apartment, this might just be the happy medium that gives you your anime fix and keeps her from thinking you are more creepy than quirky. I’d say go for it.

Head over to Kotobukiya and pick her up today.