From Gotham City’s rooftops to its dark alleyways, Batman’s war on crime has become the stuff of legend. Commemorating these adventures of the Dark Knight, DC Direct unveils a new box set featuring one of Batman’s closest allies – and some of his most nightmarish adversaries!

This box set includes four action figures, all featuring brand new deco paints, as well as LEGENDS OF THE DARK KNIGHT SPECIAL, a unique 64-page collection of stories featuring each character’s secret origin and other tales. 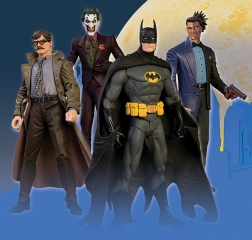