Inspired by CosPlay (from the contraction of words “costume play”) – a type of performance art and role play in which the cosplayers meticulously outfit themselves in character costumes from sources such as manga, anime, comics, movies and video games to become the characters they emulate, reenacting scenes from the original sources – these Batman CosBaby mini-figures are the cutest little tykes around!

Batman Classic (Blue Costume), The Joker, Robin, Batgirl, Catwoman, Two-Face and a special Mystery Figure, these mini-figures are the perfect size to collect and display! 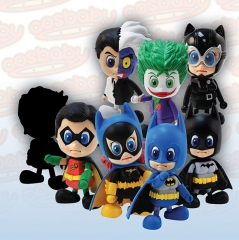