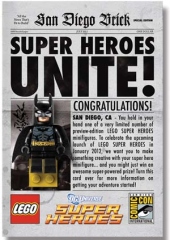 San Diego Comic-Con 2011 hasn’t officially kicked off yet and LEGO has already dropped a bombshell of an announcement. Everyone’s favorite toy blocks will soon be teaming up with DC Comics and Marvel to bring new officially licensed DC Comics and Marvel LEGO minifigs and sets! The multi-year licensing deal will be effect starting next year, but previews of the new LEGO Batman and Green Lantern will be on display at SDCC this week!

Here are the official press release:
DC Comics
Warner Bros. has expanded its relationship with Lego, granting the toymaker access to DC Entertainment’s complete library of comicbook characters and stories to launch DC Universe “Super Heroes” as figures and playsets.

The multi-year licensing deal, made through Warner Bros. Consumer Products, will start rolling out the new line in January, starting with 13 characters, including Batman, Superman, Wonder Woman and villains the Joker, Bane, Harley Quinn and Lex Luthor.

The first toys will be shown off at the Lego booth at Comic-Con Intl. in San Diego, where 3,000 exclusive Batman and Green Lantern minifigures will be distributed to launch a promo that runs August-December, enabling fans to create and submit videos, photos or illustrations of the characters to win trips to Legoland and Warner Bros. Studios.

WB and Lego had already been producing toys and videogames around the Batman franchise, and will launch a new set of playthings around next summer’s “The Dark Knight Rises” through the Lego Batman collection. The “Lego Batman: The Videogame,” published by WB Bros. Interactive Entertainment, has sold more than 12 million units since 2008.”This partnership gives builders a chance to recreate the characters, vehicles and worlds of some of the most iconic super heroes, so they can relive the action and even customize it, a proven and winning formula in Lego construction,” said Jill Wilfert, VP, licensing and entertainment for the Lego Group.

Marvel
Two of the world’s most iconic brands are joining forces as The LEGO Group, world leader in high quality construction toys, and Marvel Entertainment, LLC, a global character -based entertainment company, announced a wide ranging strategic licensing deal. Through the multi-year agreement starting as of January 1st, 2012, Marvel has granted LEGO Group the rights to develop a distinct Marvel branded construction toy collection — LEGO SUPER HEROES — which will bring the characters, vehicles and action of Marvel’s renowned universe to the world of LEGO® build-and-play adventure. The LEGO SUPER HEROES Marvel collection’s initial construction sets, minifigures and buildable characters are scheduled to launch in May of 2012.

Our partnership with Marvel helps us continue to deliver some of the best and most constructible Super Hero stories of all time,” said Jill Wilfert, vice president, licensing and entertainment for The LEGO Group. “We’re thrilled to partner with Marvel to create creative, constructive play sets for builders, fans and collectors alike.”

Joann Mclaughlin, Executive Vice President Toys & Hardlines, Marvel Entertainment, commented, “The partnership with LEGO Group furthers Marvel’s strategy to align our brand with the best in class leaders across various industries who have the global marketing expertise and distribution clout to stand out in the retail environment. This deal solidifies the already robust presence of our characters and the overall Marvel brand in the ever important toy category.”