At 5.3 million Lego bricks and over 6,000 lbs, the X-Wing is the largest Lego sculpture ever created.

The Rebel Alliance made an appearance in Times Square today when Lego unveiled a life-sized replica of an X-Wing Fighter. At 5.3 million Lego bricks and over 6,000 lbs, the X-Wing is the largest Lego sculpture ever created.

Check out the images, video and official press release below: 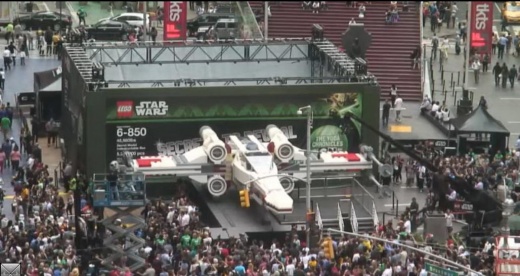 Check out this behind the scenes interview from Yodanews.com

The LEGO Group Unveils World’s Largest LEGO® Model To Delight LEGO Star Wars™ Fans Across The Galaxy
-More than five million LEGO bricks used to create life-sized X-Wing starfighter in celebration of new LEGO Star Wars animated TV special “The Yoda™ Chronicles” premiering on Cartoon Network-
NEW YORK, May 23, 2013 — The LEGO Group today unveiled the world’s largest LEGO model, a 1:1 replica of the LEGO® Star Wars™ X-Wing starfighter, in New York’s Times Square. To celebrate the upcoming premiere of The Yoda Chronicles on Cartoon Network on Wednesday, May 29 at 8:00 p.m. (ET, PT), the massive replica took 32 master builders, five million LEGO bricks and over 17,000 hours to complete. The model weighs nearly 46,000 pounds, stands 11 feet tall and 43 feet long, with a wingspan of 44 feet. The Model will “take off” for a summer landing at LEGOLAND® California Resort where it will be installed through the remainder of the year.

“Just as kids love to test and hone their LEGO building skills and imaginative storytelling, our LEGO Master Builders are always testing their creative skills to top their last larger-than-life sized creations,” said Michael McNally , Brand Relations Director for LEGO Systems. “The size and structural complexity of a freestanding model 42 times the size of one our retail sets was a challenge they could not resist.”

LEGO Star Wars is the original and most successful licensed product collection in The LEGO Group’s history and remains among the best-selling global toy lines. The theme’s evergreen strength comes from its appeal across generations to fans of all ages and a steady introduction of digital content such as The Yoda Chronicles to compliment the building experience.

“Much the same way that fans can build the Star Wars universe with our LEGO sets, we are fortunate to work with Lucasfilm to build new stories, characters and vehicles through one-of-a-kind content such as the new ‘Yoda Chronicles’ miniseries launching on Cartoon Network,” said Nicholas Hort , LEGO Star Wars brand manager.

• Contains 5,335,200 LEGO bricks
• Weighs 45,980 pounds
• Height: 11 feet / 3.35 meters
• Length: 43 feet / 13.1 meters
• Wingspan: 44 feet / 13.44 meters
• 32 builders spent 17,336 hours to construct – about 4 months
• Built in the LEGO Model Shop in Kladno, Czech Republic
• Is a one-to-one replica of LEGO Star Wars set #9493; The model is 42x the size of the retail building set
• The model was heavily engineered to withstand all the transportation, setup/break down and to ensure it was safe for Times Square given the subway system below and California’s seismic requirements for the LEGOLAND California Resort installation.

How to Celebrate From a “Galaxy Far, Far Away” with Cool Content and LEGO Bricks
“The Yoda Chronicles”
The Yoda Chronicles is an exciting, funny and action-packed new LEGO Star Wars story told in three animated TV specials. “The Phantom Clone” will premiere on Wednesday, May 29 at 8:00 p.m. (ET, PT) on Cartoon Network with specials two and three airing later this year. In the first of three specials, a brand new character, Jek 14 will enter the Star Wars universe. Created by the LEGO Group, Jek 14 is a clone who has been ‘enhanced’ by the Force.

About The LEGO Group
LEGO Systems Inc. (LSI) is the Americas division of The LEGO Group, a privately-held firm based in Billund, Denmark that is the world’s leading manufacturer of construction toys. The company is committed to the development of children’s creative and imaginative abilities through high-quality, creatively educational play materials, and its employees are guided by the motto adopted in the 1930s by founder Ole Kirk Christiansen: “Only the best is good enough.” For more information, visit www.LEGO.com

STAR WARS, THE CLONE WARS and related character names are trademarks and/or copyrights, in the United States and other countries, of Lucasfilm Ltd. and/or its affiliates.