Check out the unpainted prototype of the upcoming Marvel Select Deadpool slated to be released in 2010!

Diamond Select Toys and Art Asylum have announced the next figure for their 7″ Marvel Select collectible line. And it’s not surprising that it’ll be everyone’s favorite Merc With A Mouth, Deadpool. He’s said to come equipped with a ton of accessories and a maskless variant is also on its way. Deadpool is still in the works and won’t be released until next year, in the meantime check out the unpainted prototype teaser below. 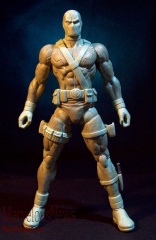