MattyCollector has released a selection of amazing new artwork for the Masters Of The Universe 30th Anniversary, which will also be featured in the upcoming MOTUC toy packaging in 2012. 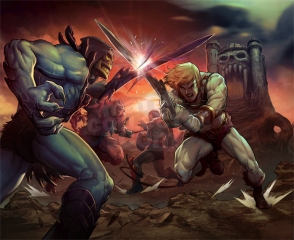 MattyCollector has released a selection of amazing new artwork for the Masters Of The Universe 30th Anniversary, which will also be featured in the upcoming MOTUC toy packaging in 2012. Here’s a sneak peak at the new art created by the very talented Alvin Lee (Street Fighter) and be sure to check out the press release for more details:

The holidays are just about here, so we thought we’d give you a little present… here’s your first official look at the all-new artwork for the Masters of the Universe® 30th Anniversary celebration!

Gabriel De La Torre, Staff Product Designer from Mattel Entertainment Design, told us, “This ‘alt’ style to the Classic brand was created as a visual way to re-imagine the vast characters and worlds of Masters of the Universe® with a contemporary edge. This dynamic artwork will be used across multiple categories in consumer products and beyond, celebrating our Masters of the Universe 30th Anniversary program launching in 2012.”

Creating a new look for an iconic brand like MOTU while still retaining the integrity of its original style was no simple task. Gabe and his team searched for an artist who not only had the style they envisioned, but also a love for MOTU. “We landed on a well-known talent named Alvin Lee, whose work can be seen in a variety of brands and also many popular video games. With the finished product, his passion for the characters and the brand really shined through. Raymond Makowski (Staff Product Designer) and I worked with Alvin Lee to create a dynamic collection of poses and battle scenes that not only pushed the designs of the characters, but also captured the essence of the Masters of the Universe® feel–heroic, perilous and empowering.” Gabe said.

Look for the new art to appear on toy packaging starting in Q1, and on licensed goods from shirts to lunchboxes throughout 2012. We’ll have more updates at New York Toy Fair in February, but in the meantime, click here to feast your eyes on images of favorites including Skeletor® and Beast Man®!