In line with the official “Avatar” trailer unveiling and “Avatar Day,” Mattel has finally released official high res images of their upcoming “Avatar” toys. Some of these were first shown at SDCC last month, but now they have unveiled the rest of the line that’s set to include “Avatar” creatures, vehicles and action figures.

Additionally, they have set up both a Twitter feed and a Flickr gallery page with pictures of all the toys. 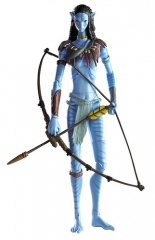 To see the rest of the “Avatar” toy line, hit up Mattel’s Flickr site above.